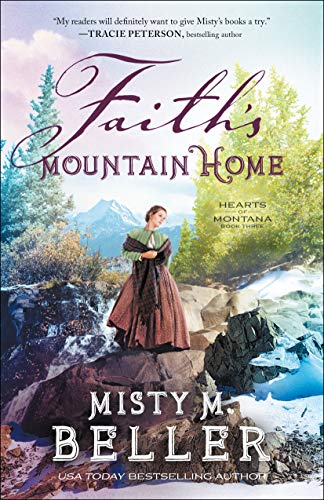 "That long familiar knot pulled tight in his gut . . . . . God had forgiven him, but truly putting the past behind him was a whole new matter."

Nate Long is a new man on the inside. Having confessed his past mistakes to both God and man, he is trying to live a new kind of life, working off a debt incurred through lawless associations , while also encouraging his twin brother during a long recovery from a gunshot wound that nearly shattered his leg. But it's the lovely young physicians assistant who begins to work another kind of miracle; this one burrowing deep within the recesses of Nate's lonely heart.

Laura Hannon is a bit wary of getting too close to the Long brothers. After all, they were members of the gang of bandits who had kidnapped her, but to their credit, they had attempted to keep her safe during the unfortunate incident. If only her stray shot hadn't damaged Aaron Long's leg causing severe damage. Thankful for the opportunity to settle in Settler's Fort while aiding the local physician and his wife, Laura is unexpectedly thrust into accepting Nate's help, finding that his handsome exterior houses a kind nature and a genuine desire to lovingly protect. Does she have the courage to believe in her own happy endings?

Readers will genuinely respect this author's ability to weave Scriptural truths into the very fabric of her characters; this story displaying the freedom from one's past that only forgiveness can bring while demonstrating God's remarkable power to resolve situations outside of human control. And of course, a little romance makes everything sweeter!
*I received a copy of this book from the author and publisher. The opinions stated above are entirely my own.

BackCover Blurb:
Nate Long has always watched over his identical twin brother, Aaron, even when it put him on the wrong side of the law. When Aaron is wounded in a shootout, the brothers are taken to Settler's Fort to recover. As Nate works to make reparations for their past, he marvels at the nursing Aaron receives under the care of a woman with all the reason in the world to resent him.

Laura Hannon knows what it is to start over, and she knows Nate's newfound faith is real. What she can't look past is how far he allowed himself to be led astray by his brother's weaknesses.

As a fledgling trust grows between Nate and Laura, they stumble upon a mysterious cave in the mountains that may not be as uninhabited as it seems. While working together to unravel the secrets surrounding the cave, will the new lives they seek for themselves include love, or does too much stand between them?