THE THIEF OF BLACKFRIARS LANE by Michelle Griep, Reviewed by Winnie Thomas 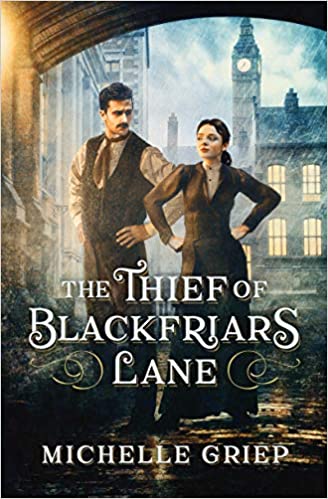 “Perhaps I cannot save the world, but that doesn’t mean I cannot make it a better place.”

With a setting in the streets of London in 1885 and a colorful, amusing, and sometimes strange cast of characters, Michelle Griep has penned another adventure that kept me absorbed to the last page. Not only did I visit the underground sewer tunnels, but I also traveled to the lavish mansion of the Lord Mayor, and everywhere in between.
Jackson Forge and Kit Turner are an unforgettable pair. Jackson is a constable trying to make his mark in life and save the world. Kit is trying to take care of her poor friends by conning the rich. Together, they make a madcap dynamic duo that go on one adventure after another. I loved the interaction between the two, with Kit showing Jackson her side of London, and Jackson trying to stay above the law and keep his job.
“It was blackguards like this that gave swindling a bad name.”
Filled with all sorts of unusual characters, this story was typical captivating Michelle Griep fare—amusing, adventuresome, and sometimes thought-provoking. The threads of inspiration woven seamlessly into the tale add depth and dimension without being preachy at all.
“Things can change. You can change. God can make all things new."

I thoroughly enjoy Griep’s writing and look forward to more of her stories. 4.5 stars
*I voluntarily reviewed a complimentary copy from Barbour Publishing. All opinions are my own.

BackCover Blurb:
There’s Often a Fine Line Between a Criminal and a Saint

Constable Jackson Forge intends to make the world safer, or at least the streets of Victorian London. But that’s Kit Turner’s domain, a swindler who runs a crew that acquires money the old-fashioned way—conning the rich to give to the poor. When a local cab driver goes missing, Jackson is tasked with finding the man, and the only way to do that is by enlisting Kit’s help. If Jackson doesn’t find the cabby, he’ll be fired. If Kit doesn’t help Jackson, he’ll arrest her for thievery. Yet neither of them realize those are the least of their problems.
Barbour Publishing, January 2021
Available in digital ebook, paperback, and audiobook:
Buy The Thief of Blackfriar's Lane at Amazon
Buy The Thief of Blackfriar's Lane at Christianbook.com
Posted by Debra E. Marvin at January 30, 2021