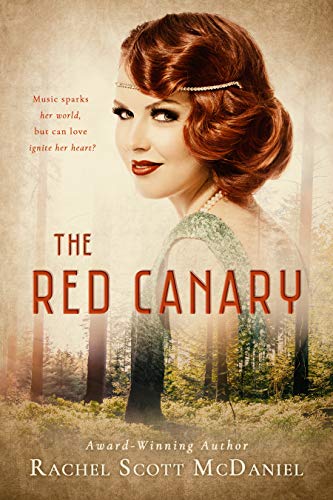 "She'd worn pride as thickly as her makeup, covering her flaws, concealing her shortcomings. Didn't she know to be flawed was to be beautiful? That no matter how layered, how far beneath the surface was scarred, mercy ran deeper. To be healed by His wounds and to be freed by His surrender, now that was a beauty no cosmetic could duplicate."

When Sergeant Mick Dinelo is assigned protective custody over a material witness for a high profile Pittsburgh murder investigation, he never imagined that his heart would wage war with his head over how to manage the ravishing beauty many referred to as "the red canary". Night club entertainer Vera Pembroke had made serious allegations, stating that she knew exactly who had killed the manager of the The Kelly Club. Whisking Vera off to a remote location, fearing that her life could be in serious jeopardy, Mick instinctively knows that Vera's prickly demeanor hides a vulnerability that presents him with a challenge; he must convince her to be completely honest with him about what exactly happened on that rainy night when she returned to the club. Realizing that Vera trusts virtually no one but herself, pushes Mick has to face the fact that his own demons are preventing him from being completely forthcoming with her.

What a luscious blend of an unique historical setting with characters (and two fantastic secondary personalities) perfectly sculpted to match; the flame of romance breathing life out of death, and the power of the cross providing solace for two very troubled souls. Rather than feeling like outsiders looking in, readers will readily embrace their role of impassioned participants, working tirelessly alongside Mick and Vera to put the details of this case to rest, so that the canary can live the rest of her life filled with song.

"You said you needed a song."

*I purchased a copy and was under no obligation to provide a review. 3.5 stars

BackCover Blurb:
Music sparks her world, but can love ignite her heart?

In 1928, soot from the local mills and music from speakeasies linger in the Pittsburgh air. When the manager of The Kelly Club is found dead, nightclub singer Vera Pembroke is thrust into peril. As the only witness to the crime, she’s sentenced to hide away in the Allegheny Forest with a stuffy police sergeant as her guardian.

Sergeant Mick Dinelo harbors a burning hatred for Pittsburgh’s underworld after the devastation it left on his life—and heart. He should be out exposing culpable gangsters rather than tending to the impetuous woman who defies his every effort to keep her safe.

Mick and Vera must set aside their differences to solve the murder that someone wants to keep buried beneath the soot of Steel City.