TO DWELL AMONG CEDARS by Connilyn Cossette, Reviewed by Rebecca Maney 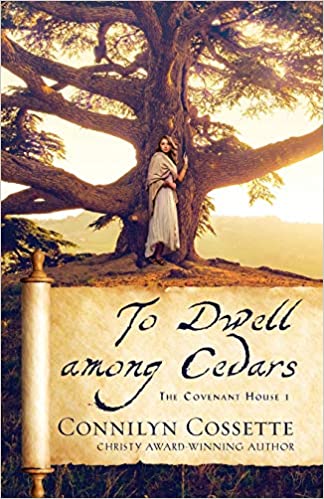 "Follow the Ark, Arisa. Do not turn to the right or to the left, and do not stop until it dwells among cedars and you are sheltered in perfect peace."

Urged to flee Philistia before being forced to slave among lascivious temple priests, Arisa and her younger brother Lukio follow the curious gold box belonging to the Hebrews, as it makes it way out of Ashdod. Their childhood servant, a humble Jewish woman named Azuvah, had whispered stories about Yahweh all their lives, but hearing about Him and believing in Him were two totally different concepts. Tired, hungry, and homeless the two siblings happen upon a celebratory welcome for the revered Ark of the Covenant, only to become eye-witnesses to the magnificent holiness of the One true God.

Years pass following the adoption of the two orphans into a kind and compassionate Hebrew family. The talented Levite musician Ronen, who initially rescued Eliora (her new name) and her brother, returns to Kiryat-Yearim to discover that the scared little waif who clung to his back has turned into a very beautiful young woman. But Ronen's task in Eliora's home is not a pleasant one, for he is virtually a spy, working silently for an opposing Levite faction whose primary goal is to purloin the Ark in order to transport it back to the fully restored tabernacle. Urged by his cousins to use his masculine charm to extract information from Eliora regarding the Ark's location, Ronen quickly finds himself torn between the God he thought he knew about and the God that Eliora serves with her whole heart.

This author's ability to bring Scripture to life is astounding; capturing the beauty of the Old Testament with resounding joy, the book's powerful imagery paints landscapes of love, honor, and sacrifice, its characters exude the fragrances of flawed humanity who bow humbly before a God who not only sees and hears, but loves and forgives; a God who grafts the weak into the branches of the strong, and a God who writes His own song upon every heart, .

"There is no song more beautiful than the one the Creator is composing with every note of your life, one he's been weaving together even before your first breath."
*I receive a copy of this book from the author and publisher. The opinions stated above are entirely my own.
*To Dwell Among Cedars can be found on multiple 2020 Favorites Lists!
See Winnie's and Kim's Reviews
BackCover Blurb:
Eight years ago, when the Philistines stole and then surrendered the ark of the covenant back to the Israelites, Eliora left her Philistine homeland to follow the ark to the community of Kiryat Yearim. There, the family she was adopted into has guarded the ark at the top of a mountain in seclusion.

Ronen is a Levite musician determined to secret away the ark to a more fitting resting place, watched over by priests who would restore the Holy of Holies. He never expected that the Philistine girl he rescued years ago would now be part of the very family he's tasked to deceive.

As Ronen's attempts to charm Eliora lead them in unexpected directions, betrayal leaves Eliora with strained family ties and Ronen questioning his own loyalties. Ultimately, Eliora and Ronen are caught up in the battle for the soul of Israel and its future under the leadership of Samuel, the last judge before the era of the kings begins.
Bethany House Publishers, December, 2020
Available in digital ebook, paperback, hardcover and audiobook:
Buy To Dwell Among Cedars at Amazon
Buy To Dwell Among Cedars at Christianbook.com