A PROPER SCOUNDREL by Esther Hatch, Reviewed by Rebecca Maney 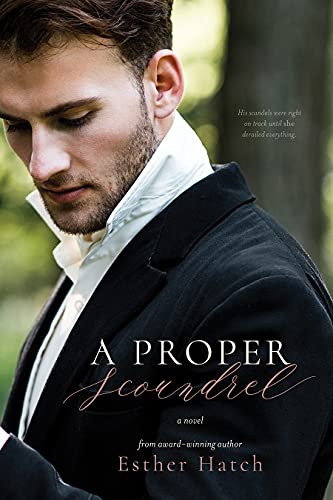 "Diana had had a few good ideas in her lifetime, but she was beginning to think her scandal with Lord Bryant was one of the best. "
Driven to distraction with the continual flow of inane men through her office, railroad owner Diana Barton had given up hope that their intentions might be to invest in her company, instead of her future . . . . after all, a husband would gain the right to oversee everyday operations, trumping decisions that Diana had every intention of making herself. The question became, what to do about it? In her desperation to scare off unwanted attention, she did the only thing that came to mind; ruining her reputation, conspiring with the best of the best in the "ruin" department, the infamous Lord Bryant. Surely, no man would want his name coupled with hers after that, and she could get back to the business of running a highly profitable railroad. Two months. Just two months. It was all she needed.

There is something incredibly enchanting about a romance that is trying its hardest not to be. Like actors on a stage without a script, Diana and Everton stumble their way through a most unconventional arrangement, only to discover that what began as a hoax, had a mind all its own. Readers won't be able to turn the pages fast enough!

*I was invited to read this book through Interviews and Reviews. I purchased a copy of my own. Inkwell Rating 1 *CLEAN FICTION

BackCover Blurb:
His scandals were right on track until she derailed everything.

As the successful owner of multiple railroad lines, Diana Barton is all too accustomed to fending off suitors seeking to stake their claim on her wealth. In order to keep the wolves at bay, Diana has contrived the perfect plan: appeal to the most notorious rake in London, the Baron Lord Bryant, to ruin her reputation and scare off the worst of the time wasters. The ruse will be no hardship—she’s secretly been fascinated by the man for years.

Lord Bryant is well aware of his questionable reputation. Indeed, he has cultivated the image carefully, and the last thing he wants is a wife. When he’s approached by the younger sister of a business associate, he tells her in no uncertain terms that he cannot help. However, when he sees for himself what she is up against, Bryant grudgingly offers his assistance. Faced with his most complicated entanglement yet, Bryant is firm in his conditions—and Diana knows that to get romantically involved with Bryant would spell certain heartbreak. But as the counterfeit couple grows ever closer, the line between truth and lies becomes blurred, threatening both Lord Bryant’s well-laid plans and the future of Diana’s railroad business.
Covenant Communications May 2021
Available in digital ebook, paperback and audiobook:
Buy A Proper Scoundrel at Amazon
Posted by Debra E. Marvin at July 16, 2021