THE LAST GASP- Ever After Mysteries Book One - by Chautona Havig, Reviewed by Paula Shreckhise 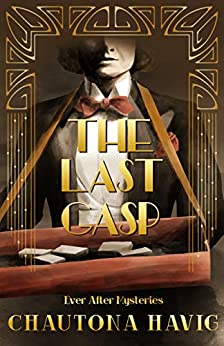 Come back to the Roaring Twenties when Hollywood had yet to go to Talkies!

Lucinda went to California with stars in her eyes but had to settle for being a cigarette girl at a theater famous for showcasing premieres.

Gary Prinz, aka Garrison Prince has decided to forgo his status as a leading man to pursue Bible School and a simpler life. Some people are not happy with this decision and things go very wrong at the premiere of his final film before becoming an ordinary Joe.

With the vernacular of an iconic era, this story is full of suspense, mystery and danger and a little romance. Gary and Cinda are looking to please God even as they try to find a killer among the theater goers.

A great side character is the orphan on the streets, Herbie, and what he comes to mean to Cinda and Gary, as well as playing a vital part in the outcome of the mystery.

Great fun and a great start to the Ever After Mysteries series. I won this, received it on release day and read it on that day!

*I won this ebook from Celebrate Lit in a contest. I was not required to give a favorable review. All opinions are my own.* I give this 5 stars and a solid faith thread

As plain old Gary Prinz, he can pursue his Bible education, buy a bungalow in Pasadena, acquire a few chickens, and marry the girl of his dreams. He just never imagined trading the silver screen for a pulpit would wreak such havoc.

A cigarillo girl, Lucinda Ashton spends her days with her boyfriend, Gary, and her evenings selling candy and “gaspers” to the Hollywood elite at the Taj Mahal Theater.

However, when gunshots ring out just as intermission begins, Lucinda finds herself smack-dab in the middle of a brouhaha that leaves three dead, and no one has a clue why.

All the police know is that the evidence points to Lucinda as the killer and Gary as the intended target.

Four new friends, one young orphan, and a potluck of clues that don’t seem to fit anywhere leave the police baffled, Lucinda in fear for her freedom, and Gary ready to trade in his acting shoes for gumshoes if it’ll save his “Cinda.”The first book in the Ever After Mysteries combining beloved fairy tales and mysteries, The Last Gasp. This Cinderella retelling blends a murder with enough crime and story clues to keep you on the edge of your seat.
Celebrate Lit Publishing July 2021
Available in digital ebook and paperback:
Buy The Last Gasp at Amazon
Posted by Debra E. Marvin at July 09, 2021