THE CHASE by Lisa Harris, Reviewed by Paula Shreckhise 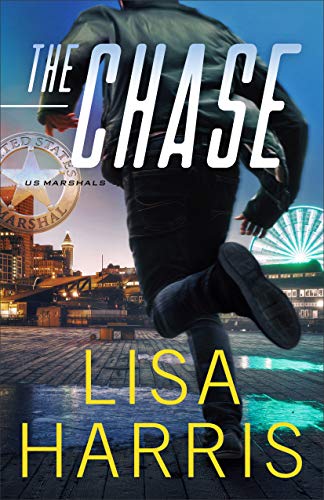 In this second book of the series, U S Marshal partners, Madison and Jonas are on the trail of four fugitives from a bank robbery gone wrong. What a way to start the first day back from an injury for Madison James.

The culprits manage to keep one step ahead of the Marshals in a desperate cat and mouse game and nail biting chase.

The author gives us another glimpse into the relationship between Madison and Jonas that started in The Escape. They are their for each other every step of the way. But could this turn into something more?

The excitement ramps up as they figure out where the fugitives are, but they are not sure all the clues are related to the present case. Could someone still be after Madison as she tries to uncover clues to her husband’s murder five years ago?

As one story concludes, we will have to wait for other answers to be revealed in the third book of the series.

Well plotted and thrilling, this book is a great story to get absorbed in.
*I received a complimentary copy of this book from Revell through Library Thing Early Reader program. I was not required to give a favorable review. All opinions are my own.*

US Marshal Madison James may not be sure who shot her three months ago, but she does know one thing--it's time to get back out into the field. When her partner, Jonas Quinn, receives a message that a federal warrant just came in on a man connected to a string of bank robberies, Madison jumps at the chance to get back to work. What she and Jonas find is a bank robbery in progress that's gone wrong--and things are about to get worse.

For these bank robbers, it's never been just about the money. It's about taking risks and adrenaline rushes, and getting caught is not part of the game. When the suspects escape, Madison and Jonas must hunt them down and bring them to justice before someone else--someone close to them--gets hurt . . . or worse.

From Seattle to the San Juan Islands, bestselling author Lisa Harris takes you on a nonstop chase where feelings are complicated and failure isn't an option.