WHEN THE PILOT FALLS by April Hayman, Reviewed by Paula Shreckhise 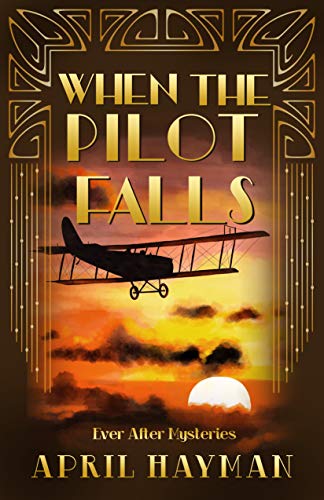 Book three in the Ever After Mysteries.

Travel back to the days of bi-wing planes and stunt shows in this intriguing tale of hidden pasts and thwarted love. Set during prohibition, this story has the glamour of Hollywood stunt flying and a criminal family feud.

The heroine, Willie, is a female stunt pilot with tenacity who will not let obstacles like crashing her plane get in her way. The hero, Hugh, is a man of conviction and stands by his word.

This was an engaging, exciting story and took us into the world of a mobster kingpin and his manipulative daughter. A nice, quick read with a solid faith thread and justice prevailing.
*I received a complimentary copy of this ebook from Celebrate Lit. I was not required to give a favorable review. All opinions are my own.*
4 stars and. a solid faith thread.

BackCover Blurb:
In 1923, there aren’t many pilots, but Willie Labeau didn’t let that stop… her.

A bear of a man, Hugh Taylor, needs a stunt plane pilot, and despite their rocky introduction, Willie sets off for golden California and a new life as his pilot. There’s just one little thing she has to do in addition to flying.

Leave his past alone. Period.

When the flame of her own curiosity becomes fanned by encouragement from Willie’s sister, the feisty pilot can’t help but do just a little investigating.

Friends rally around her, and with all the information she can find in hand, Willie sets off to rescue Hugh and battle the evil family holding him hostage.

A fierce air race, a sincere act of humility—are they enough to free Hugh and give Willie a chance to be with him… forever?Find out in this next book in the Ever After Mysteries, combining beloved fairy tales and mysteries. When the Pilot Falls offers a retelling of “East of the Sun, West of the Moon” that will keep you gripped to the edge of your seat as you watch hearts soar and daring dos.
Celebrate Lit Publishing, September 2021
Available in digital ebook and paperback at Amazon