TO WRITE A WRONG by Jen Turano, Reviewed by Winnie Thomas 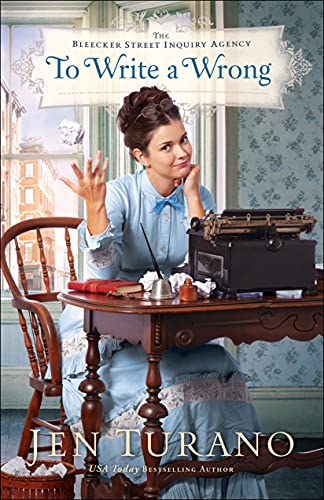 “I would hate to leave her swooning on the front vestibule before she’s had a chance to convince everyone she’s a sophisticated woman of the world.”

I’m loving Jen Turano’s Bleecker Street Inquiry Agency series. I just finished Daphne Beekman’s story in To Write a Wrong and what a treat it was! In true Turano fashion, this book is filled with colorful, engaging characters that charm their way into your heart. Daphne is a writer who is also a member of the Inquiry Agency, although in limited ways.

“I was once pressed into service because I was the only one that fit into a Cleopatra costume.

When she meets Herman Henderson who wants to hire the agency to find out who’s trying to kill him, sparks begin to fly and mayhem starts.

“I fear the lure of an honest-to-goodness murder investigation is too tempting to ignore.”

Turano is a pro at dreaming up ridiculous and fun settings and situations to place her characters in. I adored Daphne and Herman and enjoyed seeing their relationship change and grow. The stellar cast of supporting characters added to the delightful tale, and I loved seeing some of the people from the previous book in the series show up in this one.

“Tell me, though, why do you and your friends prefer talk of sentence structure over poison? Poison would be far more interesting.”

With plenty of action, suspense, a dash of romance, and lots of crazy antics, this book is a great addition to my keeper shelf. I’m looking forward to reading Eunice’s story in the next book of the series. 4.5 stars
*I voluntarily reviewed a complimentary copy from the Bethany House Publishing. All opinions are my own.
See Paula's Review!

BackCover Blurb:
Miss Daphne Beekman is a mystery writer by day, inquiry agent by night. Known for her ability to puzzle out plots, she prefers working behind the scenes for the Bleecker Street Inquiry Agency, staying well away from danger. However, Daphne soon finds herself in the thick of an attempted murder case she's determined to solve.
Mr. Herman Henderson is also a mystery writer, but unlike the dashing heroes he pens, he lives a quiet life, determined to avoid the fate of his adventurous parents, who perished on an expedition when he was a child. But when he experiences numerous attempts on his life, he seeks out the services of the eccentric Bleecker Street Inquiry Agency to uncover the culprit. All too soon, Herman finds himself stepping out of the safe haven of his world and into an adventure he never imagined.
As the list of suspects grows and sinister plots are directed Daphne's way as well, Herman and Daphne must determine who they can trust and if they can risk the greatest adventure of all: love.
Bethany House Publishing, August 3, 2021
Available in digital ebook, paperback, hardcover, and audiobook:
Buy To Write a Wrong at Amazon
Buy To Write a Wrong at Christianbook.com
Buy To Write a Wrong at Baker Book House
Posted by Debra E. Marvin at September 17, 2021