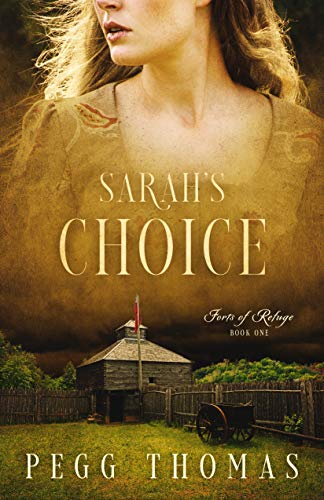 There were many days when Sarah Feight wondered why she had survived. Having experienced unspeakable horrors, she was haunted by the memory of losing her beloved husband and extended family in the dead of one night, crushing her idyllic life on Pennsylvania's wild frontier. Sarah's future could have been forever marred, but for the one who had rescued; a freighter named Leith McCully who arrived on the grisly scene, gently prying Sarah's hands away from her husband's lifeless body before carrying Sarah to the relative safety of Fort Pitt. If only that had been the whole of her story.

"If he was reading her right, she was choosing whether or not she wanted to live. What could he say to persuade her?"

Sarah Feight was exactly the kind of woman the frontier needed if she could overcome her debilitating sorrow. Leith McCully would be blind not to notice all of her outward attributes, but it was her strength of character that was even more attractive. Little by little it appeared that the young widow was beginning to trust him, but would it be enough? "The least he could do was to see after (her) welfare . . . he wasn't going to fail her".

This story embodies the essence of love and loss on the American frontier. Filled with real and imaginary characters. its pages boldly declare a tale of admirable tenacity in the face of a rapidly changing American landscape. Sarah faces many, many challenges and a myriad of choices; some of her decisions seem questionable but understandable. Others are nothing short of courageous. Enjoy this peek back in time, when nothing or no one but God himself stayed the same.

"She hadn't imagined anything good rising from the ashes of such a tragedy. How very wrong she'd been."
*3.5 stars. I purchased this book and was under no obligation to provide a review.

BackCover Blurb:
Sarah Feight has her life planned with a loving husband, a promising new settlement, and big dreams to shape the future of trade on Pennsylvania’s frontier. An Indian attack at dawn changes everything.

When he pulls his freight wagons into Fort Pitt, Leith McCully never dreams he’ll be conscripted into the militia and ordered to defend the fort. Worried about trader friends on his delivery route, he rides to their settlement and returns with Sarah, the only survivor.

Fort Pitt is crowded to twice its capacity with the settlers who have taken refuge there and surrounded by the rising smoke of burned-out settlements. Tempers flare, disease breaks out, and the constant fear of the next attack has everyone on edge.

Cully keeps an eye on Sarah because he feels responsible for her. And, though he doesn’t admit as much, she tugs at his heart. Sarah sees Cully as the last link to her past. A friend of her husband’s family. She’s going to need someone she can trust, and she trusts Cully. Her rescuer.

Are trust and admiration enough to help them survive the siege and its devastating consequences? Is there any hope for a future beyond?
August 2021-Available in digital ebook and paperback at Amazon
Posted by Debra E. Marvin at September 20, 2021