CASTLE OF REFUGE by Melanie Dickerson, Reviewed by Paula Shreckhise 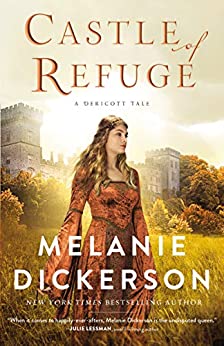 Based on the fairytale, The Ugly Duckling, this is a medieval tale of a wronged heroine and a flawed hero who comes to her rescue.

While both are dependent on God, they still have some healing to do.

For Audrey: “ She wanted to fulfill a purpose...she felt very strongly that there was something she was supposed to do, a good work God had planned for her to do since before she was born.”

For Edwin: Striving to be the best lord for the people under his domain, to be a better ruler than his father.

For both: calling on God for help when all looked bleak and finding refuge in Him.

It is told in an easy to understand, fairytale-like way, with recognizable evil, a touching romance, some danger and a happily ever after.
*I won this book from Goodreads in April 2021. All opinions are my own.* 4 stars and a underlying faith thread.

Ever since she was a child, Audrey wanted her life to be extraordinary. But as the daughter of a viscount born in late fourteenth-century England, the only thing expected of her was to marry—until an act of malice by her sister, Maris, four years ago damaged her face and her prospects. Though Maris was sent away, twenty-year-old Audrey is still suffering the scars of her sister’s cruelty. When her father announces his plans to marry off his damaged daughter and bring Maris home, Audrey decides to flee in search of her true destiny.

Life outside her home is dangerous, and Audrey soon finds herself attacked, sick, and in desperate need of help. She is taken in at Dericott Castle to be nursed back to health. While there, she decides to keep her identity a secret and work as a servant in the castle. But she doesn’t count on falling in love with the young and handsome Lord Dericott, who lost his arm several months earlier and bears scars of his own.

Meanwhile, Edwin—Lord Dericott—is curious about the new, well-educated servant’s identity. All he knows is that he’s quickly becoming smitten with her. When the man Audrey’s father wanted her to marry comes looking for her, she and Edwin must make life-changing decisions about what to believe and whether or not love is truly worth trusting.
Thomas Nelson Publishing, June 2021
Available in digital ebook, hardcover, and audiobook:
Buy Castle of Refuge at Amazon
Buy Castle of Refuge at Christianbook.com
Buy Castle of Refuge at Baker Book House
Posted by Debra E. Marvin at September 30, 2021