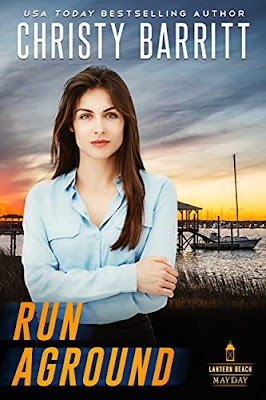 "A man lay on the floor in front of her, blood covering the chest of his white uniform. . . . . . It was Captain Bridgemore."

What a way to begin a potential new career path, discovering the captain of a luxurious yacht, the "Almost Paradise", murdered on the deck. Former med student Kenzie Anderson had certainly not figured that into her plans, nor had she imagined meeting a man like Jimmie James Gamble who came to her rescue not once, but twice in twenty-four hours no less; a Lantern Beach resident with a lot of sea-faring experience, but in spite of his kind, heroic nature wielded a questionable past.

Surprisingly, after the local police cleared the crime scene, the boat's owner granted Jimmie James captainship of the cruise. Unfortunately, instead of clear sailing, Kenzie and Jimmie James find themselves "running aground".

What a good book! Great characters, who instantly connect in ways they never anticipated, and wily criminals whose identities remain hidden until the very end. It was wonderful to stretch Jimmy James' persona into a story of his own, for he has been a enigmatic minor character through-out the entire Lantern Beach series. Let the "mayday" continue!
*I purchased this book and was under no obligation to provide a positive review.

BackCover Blurb:
A dead captain on a luxury yacht leads to a tumultuous seafaring journey . . .

Med student Kenzie Anderson, tired of letting others chart her future, accepts a job as second steward aboard Almost Paradise. But when she finds the captain dead before the charter even begins, her plans seem to capsize.

Jimmy James Gamble senses something vulnerable and slightly naive about Kenzie when he finds her on the docks. Realizing danger may still be lingering close, he uses his hidden skills to earn a place on the charter. But being there causes him to risk everything—especially as more suspicious incidents occur.

As they set out to sea, Kenzie and Jimmy James both wonder if they’re in over their heads. They must figure out how to stop a killer before anyone onboard is hurt . . . otherwise, both their futures might just run aground. 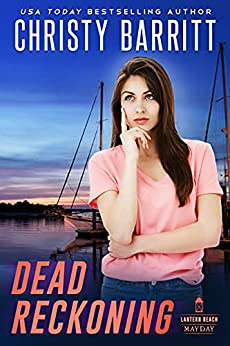 "Kenzie, do you know what a 'dead reckoning' is?"

Kenzie Anderson wasn't sure that she knew much of anything for sure . . . especially after reportedly seeing a woman strangled to death before being tossed over the side of a boat . . . especially when there was no woman in the water and no one on the boat.

But one person believed her, Jimmy James Gamble. Thank goodness for Jimmy James. Although their friendship had been strengthened through adversity, it looked like they were moving towards more . . until they weren't . . . and then they were . . . . . thrown together into the middle of yet another murderous conundrum aboard the luxury yacht, "Almost Paradise".

Kenzie and Jimmy James might have a few important details to figure out in their personal lives, but one thing was as certain as the ocean tides. . . nothing would be resolved if they didn't make it back to Lantern Beach.

A great cruise forward in this attention getting Lantern Beach Mayday series!
*I purchased this book and was under no obligation to provide a positive review.

BackCover Blurb:
A yachtie fears for her life when she’s the only witness to a murder . . .

Kenzie Anderson knows what she saw at the harbor—a woman strangled and pushed overboard. But there’s no proof of a crime . . . only her word.

Jimmy James Gamble believes Kenzie, even if no one else does. As he senses the danger in the air, all he wants is to keep her away from any more trouble—especially after their last charter. Either Kenzie or the yacht they’re working on seem to be a magnet for murder and mayhem.

Someone is willing to kill to get what he wants—and will do so again if necessary. Can Jimmy James and Kenzie navigate these unfamiliar waters? Or will relying on dead reckoning lead them to their deaths?

BUY: The Lantern Beach MayDay Series is available as digital ebooks or paperbacks at Amazon: