TIDES OF DUPLICITY and BETRAYAL OF GENIUS by Robin Patchen, Reviewed by Rebecca Maney

TIDES OF DUPLICITY
"Somehow she was both a criminal mastermind and a bumbling idiot. . . .  The Tabby he knew was neither."

. . .  except that the video evidence is pretty convincing, it sure looks like Tabby. But a safe cracker and a jewel thief; never! What did private investigator Fitz McCaffrey really know about the lovely young woman who had stolen his heart while on assignment in Belize? Practically nothing. In the end, it doesn't really matter for a known criminal has virtually kidnapped Fitz's younger sister before issuing a clear ultimatum; Fitz has one week to locate the man's stolen property or the ending to the story will be anything but . . . ."happily ever after".

Cold, snowy Coventry held no luster; Tabby Eaton knew it would be hard, she just didn't imagine how hard . . . to leave Belize . . .  to leave Fitz. It would never work between them, it had been nice while it lasted, but Tabby doubts she will ever see or hear from him again. . .  until he shows up on her doorstep that very evening.

This high stakes suspense navigates speed bumps and hairpin curves at such a high rate of speed, that readers may be tempted to take deep breaths between chapters. But at its core reside two lonely people, struggling mightily to deepen their faith in a God who never abandons His children . . .  for when Tabby admits, "I'm tired and scared and . . I have no idea what tomorrow is going to look like. I don't know what I'm supposed to be doing, I'm just . .. I feel like. . . like I'm a fish hanging from a hook, suspended between life and death" . . . Fitz answers, "we're all in the hands of a God who loves us".
Enjoy being a part of the process, because in the end, things just might work out. . . "It was all right. They had the rest of their lives."
*I purchased it and was under no obligation to provide a review.

BackCover Blurb:
A jewelry heist, a kidnapping, and a choice. When Fitz’s sister disappears, he’ll do anything to get her back, even if it means betraying the woman he’s come to love.

Private investigator Fitz McCaffrey went to Belize on a case, bringing his teenage sister Shelby along with him. They have no good reason to leave the resort and hurry back to the harsh New England winter. They lost their parents, he lost his job as a cop, and they both need time to heal. Besides, when Fitz meets and spends time with the beautiful and charming Tabitha Eaton, he falls hard.

But minutes after Tabby’s flight leaves, Fitz is summoned by a mobster who believes Tabby broke into the hotel safe the night before and made off with half a million dollars’ worth of jewels—and he has the video evidence to prove it. As Shelby’s guardian, Fitz has to focus on caring for his sister, whether Tabby is innocent or guilty. He refuses to help the man—until he learns the mobster has abducted his sister.

The clock is ticking as Fitz scrambles to recover the jewels. If he succeeds, it’ll cost the woman he’s come to care for. If he fails, it’ll cost his sister’s life. 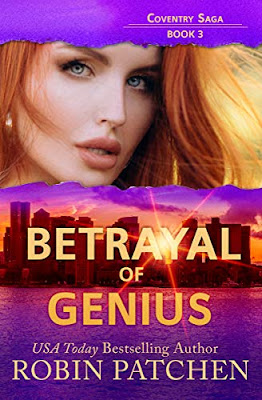 BETRAYAL OF GENIUS
"Jacqueline Beal froze in the doorway of her lab and stared at the wreckage of her life's work."

Who would do this? Perhaps, the better question would be "why"? Surely her grief-stricken business partner would not have resorted to this kind of reckless backlash; and then again, she had disappointed him with her decision not to immediately sell her ingenious invention. Was there some gain in destroying it? Reluctantly, Jacqui decides to leave Boston in order to quietly reconstruct her life somewhere else for awhile. . .  and it just so happened to be in a little out of the way place called Coventry, New Hampshire.

Reid Cote and his young daughter Ella had enjoyed getting to know the nice lady in the ice cream shop, he just never dreamed that Jacqui Beal might play a role in his personal life. While his daughter visits his ex-wife for an extended stay, what began as curiosity about Jacqui swiftly grows into something entirely different. The more Reid discovers underneath the surface of the woman who is obviously a brilliant research scientist, the more he wants to know . . .  except that it appears Jacqui and her research have danger following them around like an unwanted guest. Can he risk getting involved . . . not if he wants to ensure Ella's safety. . .and the last thing he needs is a romantic complication.

But Reid could pray, and pray he did, "I pray a hedge of protection around Jacqui, her home, her company, her employees, her invention. You have good plans for all of it and we believe You will bring those things to pass". Clearly Reid and Jacqui have embarked on an adventure of faith.

Enjoy this fast paced romantic suspense which draws out the best and the worst of two imperfect souls who sincerely want to lean on the God they love.
* I purchased it and was under no obligation to provide a positive review.

Her invention could save thousands of lives…if she can survive long enough to share it.

Jacqui’s research could lead to a cure for Alzheimer’s disease, and she’s determined to ensure the technology goes to the company with the best shot at creating life-saving products, not just the highest bidder. When her lab is broken into, she realizes her partner is desperate to get his hands on her research and the money it’ll bring. Jacqui goes into hiding, planning to lie low until she can find a buyer who lives up to her expectations.

Reid’s life is all about protecting his daughter, but when she leaves for a month to visit her mother, he finds himself at loose ends. The pretty new manager at the ice cream shop seems like a good diversion, but he soon realizes there’s more to Jacqui than doling out scoops of rocky road. When he senses danger, he’s tempted to step away—he won’t allow any threat to come near his daughter—but how can he turn his back on a woman in danger, one he’s coming to care for?

Jacqui’s former partner is closing in and getting more desperate by the day. He’ll stop at nothing to get the payout he feels he deserves.

Join Jacqui and Reid as they navigate this pulse-pounding, faith-filled adventure into the high-stakes world of medical research, innovation, and greed. Buy Betrayal of Genius at Amazon