YOURS IS THE NIGHT by Amanda Dykes, Reviewed by Winnie, Paula, and Rebecca 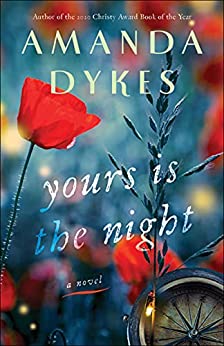 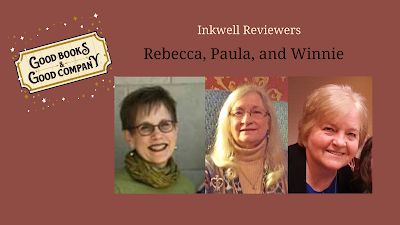 WINNIE'S REVIEW:
Once again, Amanda Dykes has written a stunningly beautiful and poignant story that has left me inadequately trying to put my feelings into words. Set during WWI and mostly in France, Yours Is the Night features a colorful, engaging cast of characters who take turns telling their stories. Their journeys of faith, hope, and courage interact and combine to make an unforgettable tale of love and sacrifice.

“But we did not come to be safe. We came to do what needed to be done.”

“Just one person, giving everything he has for another.”

I loved the growth that developed in each character and the camaraderie and love that grew among the group of seemingly disparate individuals, the way they came together to solve problems and come up with solutions.

“. . . what if what we believe to be our shortcomings, our oddities, are actually purposeful quirks that suit us for the moments we were made for?”

I also loved the inspirational messages of faith, hope, and God’s love for each of his children that are intricately and carefully woven throughout the story.

“Sometimes there’s a dark so thick you just know that the God who made light with His own two hands—with just His words—is going to plunge right into the dark to find you.”

If you’re looking for a breathtaking, heart-stopping, unforgettable read, look no further than Yours Is the Night. This author is one of the best at writing amazingly beautiful prose that will linger with you for days. This book is bound for my keeper shelf alongside her other books, Whose Waves These Are and Set the Stars Alight.
*I voluntarily reviewed a complimentary copy from Bethany House and also purchased a copy. All opinions are my own. 5 stars

PAULA'S REVIEW:
Amanda Dykes has an elegant way with words that resonates to your very soul. She is a storyteller of the highest caliber. Her words are sure and true and beautiful, bringing light from the darkness that was war.

The author continues to amaze me with her eloquent words to describe a story none of us should forget. A story of faith, selflessness and courage in a battle for freedom. The scene of using fireflies in lanterns so the enemy would not discover the soldiers may seem slight, but the author uses it to show us how God is light and He dispels the darkness.

It is told from five unique voices but that just adds perspective and shows how each character grew and was sustained in a devastating period of history. Mira is dubbed The Angel of the Argonne by the soldiers who hear her singing in the night: “It was the only thing I had to give. To bring a small bit of life to a lifeless place.”

It is a rich story of God prevailing, of honor for the fallen and of hope in the future. I am awestruck by the words in this book. It is a fitting tribute to those who fought in the Great War. Beyond 5 stars for me.
*I received a complimentary copy of this book from Bethany House on behalf of the author. I was not required to give a favorable review. All opinions are my own.* A solid faith thread

REBECCA'S REVIEW:
"Sometimes there's a dark so thick you just know that God who made the light with his own two hands - with just His words - is going to plunge right into that dark to find you."

"There are none who can undo the past. But there is one who will carry the pain of it. He knows too well the sting of injustice. No, more than that. The blood of it. But with it, He bears the scars of his own injustice with the same hands that carry me now."

"The God who does not slumber - the same God I questioned, and railed against, and sobbed to, and ran from, after He seemed not to see me or care - He brought me you. . .  He crossed you over oceans and years . . .  If He has done that, then I believe He can do anything."

It was ever so tempting to let the words of this story speak for themselves; after all, when you are privy to a majestic symphony of words, why interrupt the music with unnecessary chatter? For entering into this author's sanctuary of sound is never simply a reading experience, it is an invitation to enter a scene where every nook and cranny is filled with everlasting hope, even in the midst of seemingly impenetrable darkness. . .

Although Matthew's battle-worn mind was plagued with unforgiving nightmares, his kind and compassionate nature compelled him to use every skill necessary to ensure Mira's delivery to a safe haven, especially if his companion was correct about her true identity. But nothing fully prepared them for the journey to come, nor the one that would follow, for Mira's forest would once again became a sanctuary, for "the tree was like a house . . .  I called it 'le coeur' for the way the inside was like a heart. A safe place. . . a perfect hideaway . . .  of all the trees in all the woods". . .

Two formerly bleeding, broken hearts braved leaving the shadows behind, confidently basking in the light that was to rise, knowing that "the night is not to be feared", ever again.
*I purchased this book and was under no obligation to provide a positive review.BackCover Blurb:
A mysterious song in the forest . . .

A discovery in war-torn France . . .
A journey toward hope.

The trenches of the Great War are a shadowed place. Though Platoon Sergeant Matthew Petticrew arrived there with a past long marked by shadow, the realities of battle bring new wounds--carving within him a longing for light, and a resolve to fight for it.
One night, Matthew and his comrades are enraptured by a sound so pure, a voice so ethereal, it offers reprieve--even if only for a moment. Soon, rumors sweep the trenches from others who have heard the lullaby too. "The Angel of Argonne," they call the voice: a mysterious presence who leaves behind wreaths on unmarked graves.

Raised in the wild depths of the Forest of Argonne, Mireilles finds her reclusive world rocked when war crashes into her idyllic home, taking much from her. When Matthew and his two unlikely companions discover Mireilles, they must embark on a journey that will change each of them forever . . . and perhaps, at long last, spark light into the dark.

On the 100th anniversary of the dedication of the Tomb of the Unknown Soldier comes an emotive tale inspired by the courageous soldiers of World War I.