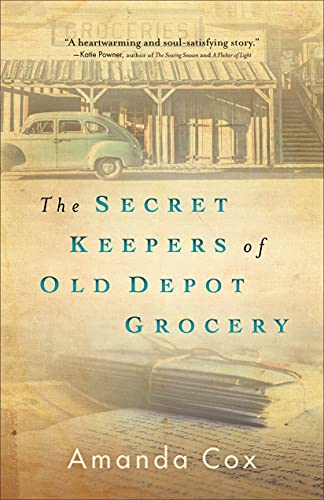 " . . . when I was little, I used to imagine that the creaking floors could talk. That they knew all the stories of the people who walked them . . . if I could just learn their secret language, those wood floors could tell me everything."

For generations the walls, floorboards, and shelves of the Old Depot Grocery held its secrets close to the heart; living, loving, losing . . . clearly too late for a resurrection . . or perhaps not? Sarah Ashby seemed to think so, returning home after her own loss, she hoped to revive the store of her childhood while discovering new meaning for her own life in the process. But some things never changed, and it soon became apparent that her mother and her grandmother were fiercely at odds over what to do with a store that was not only losing its luster, but most of its customers.

Years earlier, Glory Ann had not been given many choices for her future after confessing that she bore a child whose father who would never return home from Vietnam. Whisked away by her father, "Glory Ann Hawthorne became Mrs. Clarence Clearwater, all to cover up a secret she was not ashamed of". . . the simple ceremony taking place in the back room of the Old Depot Grocery.

Maybe all these elusive complications needed a new perspective, God's perspective. . . Sarah's gentle confidante reminding her to ,"take the first step that feels right and see what happens next, . . . I think that's how God works in our lives a lot of times. He doesn't give us the whole picture. He gives us that one step". For if the truth ever needed to be told, it was among the "secret keepers of the Old Depot Grocery" . . . for it would undoubtedly set them free.

Wonderful book by an emerging masterful storyteller!
* I purchased a copy and was under no obligation to provide a positive review.

BackCover Blurb:
Present Day. Sarah Ashby returns to her childhood home, determined to finally follow her dream of running the family business alongside her mother and grandmother. So when her mother, Rosemary, announces to her that Old Depot Grocery is closing, Sarah and her grandmother, Glory Ann, make a plan to save the store. But Rosemary has worked her entire life to make sure her daughter never follows in her footsteps. She has her reasons--but she'll certainly never reveal the real one.

1965. Glory Ann confesses to her family that she's pregnant with her deceased fiancé's baby. Pressured into a marriage of convenience with a shopkeeper to preserve her family's reputation, Glory Ann vows never to love again. But some promises are not as easily kept as she imagined.

This dual-time story from Amanda Cox deftly explores the complexity of the mother-daughter relationship, the way the secrets we keep shape our lives and the lives of others, and the healing power of telling the truth.