THE INN ON HANGING HILL by Christy Barritt, Reviewed by Rebecca Maney 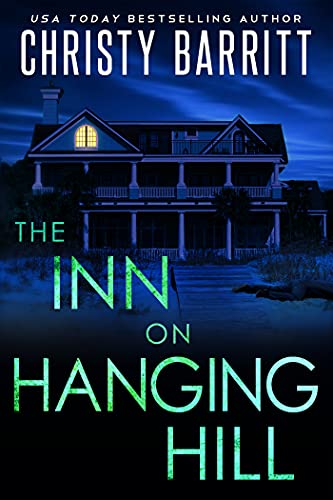 It began fifteen years earlier for Lindsey Waters. On one fateful night, an innocent act of disobedience turned into a nightmare for Lindsey and her friend Benjamin Newsom. Apparently the small community surrounding her family's ocean-side inn had never forgotten the traumatic event, while Lindsey had never been able to fully remember. And now she was back. Clearly someone didn't appreciate her return to the dilapidated Hidden Shores Inn, for the note had read, "Get out while you can". Thank goodness for Benjamin, he was back as well.

Working together on the inn's renovation brought back memories for both of them; but until, and unless, the old place gave up its secrets, a total restoration might remain just out of reach, for . . . "it seemed like they had stepped into the middle of a real life thriller movie" . . . the question became . . . could they step out?

What an interesting story . . . lots of questions, very few answers, and more than one suspect. One of my very favorite books by this author and there have been many!

BackCover Blurb:
Lindsey Waters never wanted to return to the seaside inn where she grew up. Too many traumatic memories haunt the place, both from her childhood and from days gone by. But with guilt relentlessly chasing her after a tragic choice, she’s desperate for a fresh start.

Mysterious incidents begin plaguing the inn—dangerous incidents—that make it clear someone wants to scare Lindsey away. But why? Does it have anything to do with the two weeks missing from her memory when she was abducted at age twelve?

Childhood friend Benjamin Newsom seems like an answer to prayer when he shows up to work as a handyman. But something is different about him, something Lindsey can’t put her finger on. She’s certain Benjamin harbors secrets.

As peril continues to close in, Lindsey must decide if she wants to face her past or run. She doesn’t know whom she can trust, and whatever choices she makes will determine if she lives or if she becomes part of the inn’s tragic legacy.
River Heights Publishing, September 2021
Available in digital ebook and paperback at Amazon
Posted by Debra E. Marvin at November 26, 2021