THE PARIS DRESSMAKER by Kristy Cambron, Reviewed by Rebecca Maney 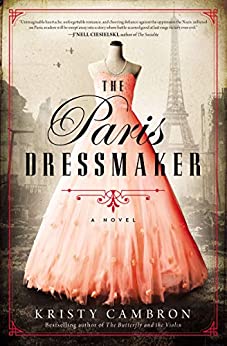 "Her options were run and die, or stop, risk, and pray"; albeit, the dressmaker was in a fight for her life. How had it come to this? From circling through-out Paris' renowned world of couture to being forced to disguise everything about herself, Lila de Laurent desperately hoists herself into the back of a delivery truck; bleeding, disoriented, and shocked beyond measure to hear a voice from the dead.

Sandrine Paquet's life had become a prison void of walls or bars. Persuaded by a German captain to assist in cataloging priceless pieces of Jewish art, her paltry employment opportunity did allow her to contribute towards her family's survival, but it came with a price; terrible misunderstanding by neighbors and friends, along with unwanted attention from the arrogant captain; however, Sandrine did what was expected, until she was given the opportunity to do more.

The French Resistance movement is a fascinating study in and of itself. Brought vividly back to life through the lives of these particular characters, "The Paris Dressmaker" designs a stunning display of bravery and courage, highlighting the role many women played in supporting the fight for life, liberty and justice for all.

The author sums it up best by concluding, "If this - or any other story - has moved you to use your life for Jesus Christ, to build up the body of believers in the Church, to speak life and grace and truth over the brethren in a way that unburdens the journey of even one soul on this earth . . . love wins the battle".

BackCover Blurb:
Based on true accounts of how Parisiennes resisted the Nazi occupation in World War II—from fashion houses to the city streets—comes a story of two courageous women who risked everything to fight an evil they couldn’t abide.

Paris, 1939. Maison Chanel has closed, thrusting haute couture dressmaker Lila de Laurent out of the world of high fashion as Nazi soldiers invade the streets and the City of Lights slips into darkness. Lila’s life is now a series of rations, brutal restrictions, and carefully controlled propaganda while Paris is cut off from the rest of the world. Yet in hidden corners of the city, the faithful pledge to resist. Lila is drawn to La Resistance and is soon using her skills as a dressmaker to infiltrate the Nazi elite. She takes their measurements and designs masterpieces, all while collecting secrets in the glamorous Hôtel Ritz—the heart of the Nazis’ Parisian headquarters. But when dashing René Touliard suddenly reenters her world, Lila finds her heart tangled between determination to help save his Jewish family and bolstering the fight for liberation.

Paris, 1943. Sandrine Paquet’s job is to catalog the priceless works of art bound for the Führer’s Berlin, masterpieces stolen from prominent Jewish families. But behind closed doors, she secretly forages for information from the underground resistance. Beneath her compliant façade lies a woman bent on uncovering the fate of her missing husband . . . but at what cost? As Hitler’s regime crumbles, Sandrine is drawn in deeper when she uncrates an exquisite blush Chanel gown concealing a cryptic message that may reveal the fate of a dressmaker who vanished from within the fashion elite.

Told across the span of the Nazi occupation, The Paris Dressmaker highlights the brave women who used everything in their power to resist darkness and restore light to their world.