LABYRINTH OF LIES by Irene Hannon, Reviewed by Rebecca Maney 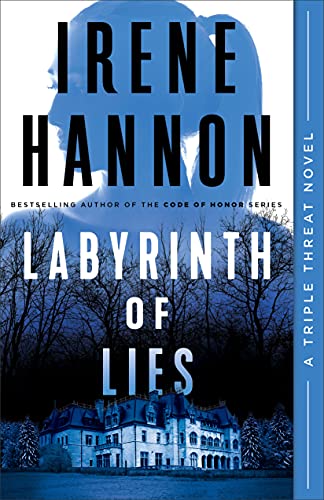 "They wanted her to take on another undercover gig? No way. Not happening."

Apparently, it was yes-way . . .  and definitely happening. Since St. Louis Detective Cate Reilly happened to be the "only one in her department who can pass for a seventeen-year-old", she was headed back to campus life, to a prestigious boarding school where a young woman and her boyfriend disappeared under mysterious circumstances.

"What in blazes was Cate Reilly doing at Ivy Hill Academy?" Undercover DEA Agent Zeke Sloan, hired as an interim Spanish teacher, is shocked to see the woman that he has never forgotten posing as a high school student. What were the chances that they could be working on the same case from different angles? There was only one way to find out, and he had a feeling that Cate was not going to like it, or any other thing about seeing his face again.

"Ties to a Mexican drug cartel. Missing teenagers. A guidance counselor with questionable intentions. Were all those seemingly disparate pieces related?" It's going to take more than a few tutoring sessions to unravel the labyrinth of lies at Ivy Hill Academy. . .and possibly even longer for Zeke to convince Cate that he is a changed man. . .one that she can trust with her whole heart . . .again.

Enjoy this author's signature layering of suspects, while quietly and deliberately salvaging a romance!
*I purchased this book and was under no obligation to provide a positive review. 3.5 stars

SEE NICOLE'S and PAULA'S REVIEWS
BackCover Blurb:
Danger awaits on a covert mission where few are who they seem to be