LIGHTS OUT by Natalie Walters, Reviewed by Rebecca Maney #Giveaway 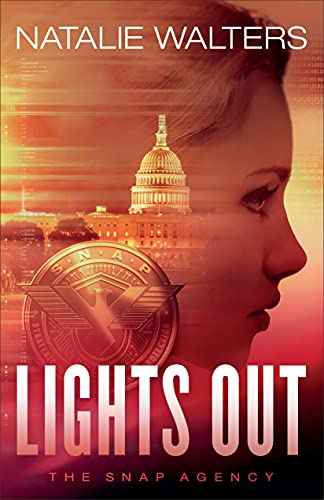 "I'm not willing to risk my team on someone who can't be trusted, and I don't trust her."

Great. Just great. Judging by the flash of hurt that crossed her face, she'd no doubt heard his words. "She", being Brynn Taylor; Jack Hudson had gone through CIA training with her, and had subsequently been left behind when Brynn was accepted into the agency and he wasn't. Pushed aside . . . was more like it. . . apparently Brynn had moved on in her career, never giving their burgeoning relationship a second glance. But now she was in his territory with her own reputation on the line. An Egyptian intelligence agent had gone missing after attending Brynn's multi-national symposium on combating global terrorism and Jack's agency, S.N.A.P., the Strategic Neutralization and Protection Agency, had just been put in charge of finding him.

After overcoming her shock over seeing Jack again, Brynn put on her brave face and drilled herself into focus; "Do not panic. Do not panic. DO NOT PANIC." He didn't trust her, of course he didn't, she had never told him the entire story. Personal history aside, she had a job to do, and if working with Jack's team accomplished the objective, so be it, regardless of the cost to her heart.

As the body count rises and terrorist threats loom like a specter on the horizon, Jack and Brynn have little time to concentrate on anything else but national security, exploring the feelings that continue to rumble just beneath the surface will just have to wait. Or can they? . . . "love is many things, none of them logical".

An excellent story! Writing a fast paced romantic suspense without leaving the audience in the proverbial "dust". . .  or compromising the character development that readers so desperately crave, demands a delicate balance. This book has accomplishes both, proving that the author has really "upped her game" and I, for one, can't wait to continue reading the series.

"It's our faith in the hard times that keeps us anchored in the hope that God will restore order . . . Choose fear or faith, but only one choice will bring peace."
*I received a copy of this book from the publisher. I also purchased a copy. The opinions stated above are entirely my own.

ABOUT THE BOOK:
CIA analyst Brynn Taylor developed a new program to combat terrorism, and she invited members of foreign intelligence agencies to America to foster cooperation between countries. Now one of them, Egyptian spy Remon Riad, is missing.

Jack Hudson has been working for the Strategic Neutralization and Protection Agency (SNAP) for almost nine years and takes the lead in hunting down the missing spy. But he isn't at all pleased to find out Brynn is involved. It's hard to trust a woman who's already betrayed you.

Every lead they follow draws them dangerously deeper into an international plot. Kidnapping, murder, explosions, poisoning--the terrorists will do anything to accomplish their goal of causing a digital blackout that will blind a strategic US military communications center and throw the world into chaos.

Can Brynn surrender control to a man who doesn't trust her? And can Jack ever get over what she did to him? The fate of the world--and their hearts--hangs in the balance.

ENTER THE GIVEAWAY FOR LIGHTS OUT PAPERBACK!

a Rafflecopter giveaway
Posted by Debra E. Marvin at November 09, 2021