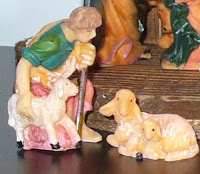 On a hill not far from Bethlehem, fifteen-year-old Nathaniel knelt beside Nimbles, his favorite ewe and calmed her with his whispers. The sheep were restless, more so than usual. Sounds carried far in the still night and it had been hours since he heard the wolves howling in the wilderness miles away.

With ten years of experience, Nathaniel knew not to trust the silence. On a night such as this as an eight year old boy, he’d had his first run-in with a wild animal. He’d awoken to the sound of a bleating lamb and had rushed over to see a huge black shadow swing it’s massive paw and bat the lamb away like a fly. The shaken lamb stood by the side, quivering while its mother took a couple steps and stumbled. The bear had stripped four slices of flesh from her side and the sight had made Nathaniel tremble with rage. Sling-shot in hand, the young shepherd had reached in his pouch and snapped pebble after pebble at the huge beast, hitting its eyes, nose and even its teeth before it finally turned and bounded away, braying its displeasure. Nathaniel still remembered the rush of pride when Josiah and the other shepherds slapped him on his back and said he’d been of great service. It sure offset the sadness he had felt at losing the ewe.

Over the years, Nathaniel had faced many beasts including lions, wolves, jackals and hyenas when the beasts came up out of the Jordan River gorge looking for a fresh food source. He knew he shouldn’t gloat about his successes at defending the flock but it was hard to be humble when God had blessed him with the most accurate shot of all the shepherds. 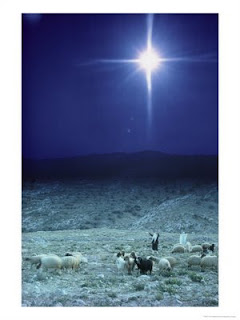 Nathaniel looked up at the heavens and marveled at the brilliant light hanging like a beacon in the eastern sky. Unlike other stars, this one grew in radiance, even outshining the moon. Nathaniel looked over his shoulder to check Josiah’s reaction but the older shepherd just leaned on his staff and stared. When Nathaniel looked back at the star, he saw it shooting a gleam of light right into the town below. He’d never seen such a sight yet he knew from stories passed down through the generations that God had appeared in different forms to convey a message to His people. Nathaniel felt his chest expand at the thought he would be the receptor of such a message. Surely it proved God, too had heard of his bravery. And so he stood, feet planted in a wide stance, sling shot tucked in his belt, hands hung at his sides, waiting. Within minutes, a man garbed in white appeared before them, his robes flowing from an unseen wind. Nathaniel knew without doubt this man was the angel of his forefathers. Yet even as he straightened to his full height with his chin jutting out, his insides twisted as if the hand of God Himself was wringing the sin right out of his body.
And then the angel said, "Do not be afraid. I bring you good news of great joy that will be for all the people. Today in the town of David a Savior has been born to you; he is Christ the Lord. This will be a sign to you: You will find a baby wrapped in cloths and lying in a manger."
Nathaniel cocked his ear toward the angel. Surely he had missed something. Instead of giving him instructions, the angel only spoke of a babe’s birth. But before he could raise a question, the heavens erupted in a dazzling light and a whole choir of angels appeared singing, "Glory to God in the highest, and on earth peace to men on whom his favor rests."
On and on they sang, their perfect voices building with such magnificence and timber they covered Nathaniel in awe and set his knees trembling. The power behind the spectacle seeped into him and he knew one whisper from the Almighty could blow him over like a grain of sand. And then the words of the choral jubilation sunk in and the young shepherd understood the proclamation. The Messiah had come at last! The beautiful star pointed the way to the place where God’s own son awaited them. It was true. It was true! Nathaniel had been chosen to serve God’s son.
In a heady daze, Nathaniel heard Josiah say, "Let's go to Bethlehem and see this thing that has happened, which the Lord has told us about."
Nathaniel took a step down the hill then stopped and looked back at his flock. He had never left his sheep unattended and yet, as he watched the others rush down the hill, Nathaniel knew on this special night, God would not let any harm come to them.
The shepherds raced, stumbling and jostling down the stony hill, through the narrow streets and around the public wells until they stopped before a stable. With shoulders shrugging and questions on their lips, they stood confounded until finally Nathaniel with his youthful curiosity stepped inside the tiny building and stared in awe at the light which drove right through the roof and shone down upon a babe in the manger. Barely clothed, the infant lay asleep with his mother resting nearby whilst his father stood guard. Here in this dirty, shelter amidst the animals, hay and manure the angel’s song rang strong in Nathaniel’s ears. This was God’s son. Nathaniel didn’t understand how a tiny human could be God’s own son, but in his heart, he just knew it was so. This was the task set forth for him. He was the one chosen to spread the news. The Messiah had been born! 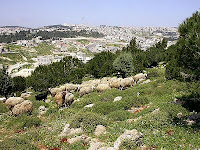 
Serious Question: How often do you start out on a course of your own choosing only to find God has led you down a different path?
Fun Question: Did you get what you wanted for Christmas?
Posted by Anita Mae Draper at December 30, 2009