I’d like to talk about life lessons my kids and I have learned from being film industry extras. 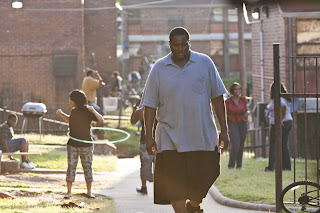 If you aren’t familiar with the people called extras, let me present an image . . . this still is from a new movie playing in theatres now. In it, we see Quinton Aaron as Michael Oher in Alcon Entertainment's drama 'The Blind Side,' a Warner Bros. Pictures release. Photo by Ralph Nelson. It's from the book of the same name by Michael Lewis.
In the still, the camera focuses on Quinton as he walks down the street. But who are those people behind him? Those people in the background are movie extras otherwise known as ‘backgrounders’. Extras provide a living landscape. In some movies they're rarely seen, in others they’re everywhere. Sometimes it depends on the director’s vision. Sometimes on the budget. An extra's name won't appear on the credits, but they're still paid for their appearance.
For our work in the film industry, our agent will call and say they need me as an adult female for a particular day. Or the agent will say she needs a female teen, or a teenage boy, etc. Sometimes they’re very specific and want someone of a certain ethnic background. If you look at the above still, you don’t see any Caucasians. That’s not an accident. I haven’t seen the movie but I believe they’re trying to portray the neighborhood Michael Oher grew up in.

Here's a still from the 2001 movie, The Princess Diaries. You can see Anne Hathaway as Mia Thermopolis with her hands raised. She stands out because everyone else (all the extras) are in dowdy black. Their job is to fill the space but be invisible. And most of them are older adults.
The first life lesson I want to mention then is that my kids have learned to accept rejection because of this picking and choosing. They’ve applied for auditions and not been picked. Sure it hurts, but it’s taught them everyone is unique and sometimes it’s the other person’s turn to shine. If they don’t get a part, it could be because their hair is too short or not curly, or they’re too tall or too short, or too fat or too skinny, etc. It makes me feel good when they leave an audition and wish the rest of the kids good luck knowing they mean it. I believe being able to handle rejection gracefully is something they’ll need as they grow into adults.
The second life lesson being an extra has taught my kids is confidence. You’d think after the rejections of the previous para it wouldn’t be like that but you’ve never seen them when it has been their turn to be picked. Paid at the same rate as an adult, their confidence is further built up when they receive their paycheck. But I think the best confidence builder is the esteem their classmates hold them because of their extra job. At least that’s what the teachers told me when my son started working in this industry.
The third life lesson I wanted to mention was that my kids learn they aren’t special. Yes, I know this goes against 2 paragraphs ago when I said they were unique but let me explain. A movie set is very regulated where everyone has a specific job. We are the extras. We are expendable. We are taken onto the set and left in a corner, usually in a metal folding chair to await our turn. While we’re sitting there, we see a table filled with plates of goodies, like donuts, muffins and cookies. Lots of fresh fruit. And there’s a selection of drinks from water and juice to coffee, tea and hot chocolate. That is the Craft Table. But it’s not ours. The Craft Table for the extras is much smaller. Ours holds a canister of pretzels, another of wrapped candy, and we can chose water or coffee to drink. Period.

Mealtimes on the set are strictly controlled. Many times we’ve finished our scene and are sitting back in the holding room where everyone will eat lunch or supper. We can see the caterer setting up. We can smell the food. Our tummies are growling as we’ve been on set for 6 hrs and all we’ve had to eat are pretzels and candy. But we can’t eat. The extras have to wait for the cast and crew to eat first. Once they’ve all gone through and are seated, then our wrangler will let us go and get ours. Seconds are up for grabs. Despite the wait for our food, we are usually well fed.

So here’s where the life lesson comes in… the kids have learned to wait even though the food is available and they’re hungry. They accept the fact others are more important and get to eat first. And they accept the mini Craft Table too. I have yet to see one kid sneak food from the wrong table. It’s just not acceptable and the kids know if they did try it, they probably wouldn’t be called back to work again. Even at their ages, they know it’s not worth the risk. 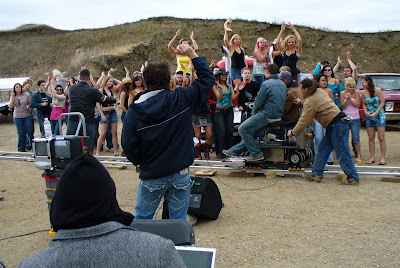 In this photo taken at the making of Jason Blaine's 2007 music video, Rock in My Boot, you see the extras standing around in skimpy clothing. Well, I tell you, it was freezing that day as can be attested by the men in the foreground wearing coats and a hat. But the video simulated a hot summer day. My daughter was one of these extras and although it was a difficult day to get through, she loved the experience. So the final life lesson is about work and comfort. The kids have worked in below freezing temps and ridiculously hot days. They've worn winter clothes in summer and vice versa. And they've learned to put aside personal comfort and wear whatever it takes to get the job done. (Yes, I'm always on the set with them.)
I don’t know how long my kids and I will work in this industry. So far, I’ve turned the agent down a couple times for unsuitable projects. But even if they never get called up again, I’ll be thankful for the life lessons they’ve already learned.

So my question for you today is about working in the movie industry. Have you ever worked on a TV or movie set? Have you ever wanted to? Which movie or TV show would you want to work on if you had a choice out of everything?
Posted by Anita Mae Draper at December 04, 2009