One of the bedrooms in my house is decorated with posters of Marvel superheroes. Wolverine, Iron Man, and The Fantastic Four are well-known in my family, but Spider-Man is a hero in his own category, as far as we're concerned. Having now lived with two generations of Spidey-fans, I know a little about Peter Parker, the teenager who received spider-ific superpowers

after being bitten by a radioactive arachnid.

Spider-Man’s adventures have been featured in comics, books, movies, and TV shows, but the three film adaptations starring Tobey Maguire as Peter Parker/Spider-Man are my favorites. The special effects are a blast, but I’ve also found themes woven through the films that have spoken to me, both in my life and as a writer. Here’s what I mean:

• Hanging by a Spiderweb? You Might Need Balance. As Spider-Man, Peter juggles superhero work with other duties. He’s in college. He works, helps elderly Aunt May, and pines for Mary Jane all while battling evildoers. How does he do it all? Well, yeah, he’s a fictional character with superhuman abilities, and he does get burned out in movie #2. In fact, he finds the balancing act tricky to some extent in all three Spider-Man movies. But after some missteps, he gets his groove back, prioritizes, and gets the job done despite the mess of his life.

Like many people, I get overwhelmed by my task list. Some days I’m up to my neck in inefficient meetings, broken appliances, and plot problems that hinge on a Regency-era factoid. Throw in a sick kid or an ant invasion in the kitchen, and nothing helps but aspirin. If I compartmentalize my duties, focus on God, remember to keep exercise in the mix, and schedule myself, however, I do a better job of handling things. Most of the time. Balance is key. 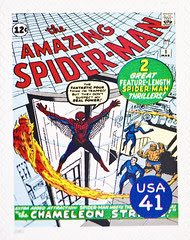 • Owner of a Lonely Heart? Reach Out. Spider-Man The Hero is a popular guy, the beloved subject of songs and Halloween costumes. Nerdy Peter, however, can’t share in his alter ego’s glory. As his cartoon theme song goes, “Nobody knows who you are.” He swings through a city full of people, saving a good percentage of them from terrible fates, yet no one knows the guy under the mask. Being Spider-Man (the most astounding thing in Peter's life) requires complete anonymity. At the end of the day, Peter, not Spider-Man, goes home alone to a pile of books and a sense of solitude; secrecy is necessary to protect those he loves.

You and I may not be living double lives, but I think it's fair to say that everybody feels lonely sometimes. I find that while I may not suffer like Peter Parker, life has its ebb and flow of friendships and social engagements. The life of a writer can be a solitary existence, too. I spend lots of time inside my head with characters for company. I could spend days engaging nothing but a computer. We can go long stretches without meeting those in our business face-to-face, as we get to know each other (and often submit manuscripts and receive rejection) electronically. But unlike poor Peter, writers have resources. I’ve discovered my own Hall of Superfriends who encourage and engage me. Every writer should join a group based on genre, critique, or craft. Or all three.

• You Knew This Was Coming. "With Great Power Comes Great Responsibility." Ah, when Uncle Ben utters this line in movie #1 (straight from the comic book), you know it's a keeper. This nugget of Peter’s uncle's doesn’t just refer to superpowers, of course. Uncle Ben certainly didn't know Peter had anything extra-super about him. It's a reminder that we must use our gifts for others’ good. I try to ask God how He wants me to use my gifts, whether they’re related to my family, church, or writing. And as they’re His gifts, I must be generous with them. What about you? Do you feel a sense of responsibility for using your gifts? Do you realize just how super your God-given gifts are? If you've ever been blessed by someone using their gifts, you should know that you can bless somebody, too, by sharing some of what you've been given. As Uncle Ben might say, it's your responsibility.

• Everyone Makes Mistakes. Even Spider-Man. I’ve made numerous missteps in my life, just ask my family. Several others can vouch for my writing boo-boos too, from grammar to style to spouting an historical inaccuracy. I’ve been called on these, and I've tried to grow from those experiences. Spider-Man grows, too, but his lessons are more painful than my chances to grow in humility have been. In the beginning, Peter chooses self over service, greed over giving, and his choice unfolds a series of events which cost Uncle Ben his life. Peter is devastated, but he eventually moves forward and becomes Spider-Man, champion of the little guy. Of course, he goes on to make more mistakes after that, just like I do (sigh). Each time he makes the wrong choice, though, he sees the error of his ways, and comes back fighting. I mess up on a daily basis, but like Spidey, I'm not going to quit. I’m trying to stay teachable, too, and grow from my errors.

• You've Got Something to Celebrate! Sometimes in the movies, Spider-Man swings through the city just for the fun of it. He soars between skyscrapers, whooping with elation. In those scenes, Spider-Man seems carefree, happy, and utterly in love with his gift, taking joy in his unique ability to do something so fabulous.

Obviously, you and I can't shoot spiderwebs from our wrists and swing from building to building, but we do have something to get excited about. Each of us has some talent, hobby or skill that gives us energy. If you're like me, you have multiple things that might come to mind (playing with your kids, knitting, or running a marathon). Like many of you, I also find exceptional joy in writing. I love the days when I sit down at the computer and my fingers can barely keep up with my characters. I love realizing it’s been four hours since I sat down, and it seems like it's only been ten minutes. There’s joy in the task, and I shouldn't forget to relish it, just like Spider-Man does when he whoops as he soars through the air. I thank God for the joy he gives you, too, in whatever activity you find it. 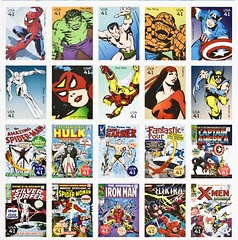 Here's my question for the day: Who's your favorite superhero? Do you love him or her because of their superpowers, or for some other reason? I'll fill you in on my favorite hero in a bit. I'd also love to hear how God has blessed you with your particular joy. What activities give you energy and a reason to celebrate?