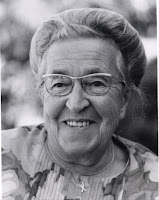 There have been lots of people throughout history to admire and even emulate. But that number quickly dwindles when we start talking about those that inspire. To inspire means to fill with the urge or ability to do something. To animate.
So often it is easy to look on from afar and think, ‘Wow, that person is great.’ But how often are we so prodded in our hearts, that we change the way we act or think? It’s rare.
I was a teenager when I first read Corrie ten Boom’s story. She wrote several books. The one that first came to my attention was The Hiding Place. It is now a masterpiece of Holocaust literature. In it she recounted her experiences during World War II.

Corrie was born in 1892, the youngest of four children. Her father, Casper ten Boom owned a watch repair business and her family lived
above their shop at Barteljorisstraat 19 in Haarlem, Holland. Her parents planted in her life a vital faith, a spiritual legacy that would stand her in good stead. 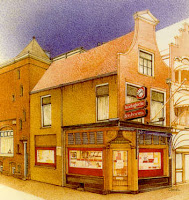 In 1922, Corrie became Holland’s first female watchmaker. She also began a religious girl’s club that eventually became the very large Triangle club. She drifted comfortably into middle-aged spinsterhood. She and her elder sister Betsy never married, and they stayed securely at home caring for their now widowed father and the family’s shop.
And then the Nazis invaded.
Their involvement with the Dutch resistance movement began as an act of love. They helped a neighboring Jewish family. And then one day in 1942 a well-dressed Jewish woman appeared on their doorstep carrying a suitcase. She was distraught. Her husband had been taken away months before. Her son had gone into hiding. The German authorities had visited her again recently and she was too frightened to return home. But rumors had reached her of the kindness they offered to their neighbors.
Life was never the same for them again. At that moment, Corrie’s family was confronted with the chance to avoid involvement and remain safe, or to risk everything for the sake of a complete stranger. They chose the path of grace. They chose the path of sacrifice.
They ushered the lady into their home. Casper ten Boom’s response to the lady was that in his home, God’s people were always welcome. As the rumors spread, Corrie, Betsy and Casper began to be visited by more refugees. They welcomes each one, treating them as honored guests, and even made a point of cooking Kosher meals and keeping the Sabbath.
Soon they were deeply involved in the resistance movement. An architect involved in the Dutch resistance came in and built a false wall in Corrie’s room. And thus the hiding place was born. It was small, the equivalent of a medium sized closet. He designed it so cleverly that the Gestapo never discovered the secret room it created.
Throughout their time as underground workers they sheltered Jews, resistance workers, and anyone else who fell afoul of the Nazi’s. They are credited with saving over 800 lives. They had plenty of room in their house, but they had to rely on God to provide the means to feed and clothe their visitors. And He did not fail them. Corrie had made many contacts through her charity work. When she humbly went to a contact to beg for extra ration cards she opened her mouth to say five and instead asked for 100. And got them.
In February 1944, it all came crashing down. A Dutch informant betrayed them and their home was raided by the Gestapo. Thanks to regular drills, all of their guests made it to safety in the secret chamber, but the Ten Booms weren’t so lucky. The Germans found extra ration cards and resistance materials in the house, then they laid a trap and arrested anyone who came to the house that day. More than thirty people were captured, but all were released within a few days, except for Corrie, Betsy and their father. 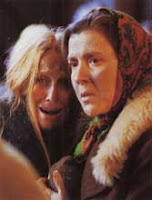 They were sent to Scheveningen prison and due to the terrible conditions, 86-year old Casper, died after only ten days of incarceration. Corrie and Betsy were moved to Vught concentration camp, and then as the war went badly for the Nazis they were marched to the infamous Ravensbruck concentration camp in Germany.
If it had been me I would have just asked God to end my suffering quickly. But despite their situation, Corrie and Betsy found new faith. They affected the lives of hundreds of prisoners.
When Corrie prayed for and received a New Testament, she used it to hold Bible studies with the other inmates in their barracks. They prayed for the lice to continue, because it kept the guards from entering their barracks. When Betsy was sick, they managed to obtain a little bottle of cough syrup. Betsy made Corrie give some to other sick inmates, even when she wanted to horde it for her sister. The medicine never ran out.
Betsy passed away December 16th, 1944, but she left her sister with words that have changed thousands of hearts. “There is no pit so deep, that God is not deeper still.”
Corrie was released just two weeks later on New Year’s Eve. She found out later that it was due to a clerical error. A week after her departure from the camp all of the women her age were slaughtered.
After the war, Corrie traveled all over the world, speaking of her experiences, but more importantly, what she learned because of those experiences. Israel planted a tree in her named her one of the Righteous Among the Nations. The queen of the Netherlands knighted her. 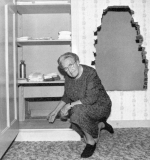 Her faith was shaken one more time after a, by now, routine speaking engagement. As she was greeting people following her presentation, a man approached her. She recognized him immediately. As he prattled on about how much he’d enjoyed hearing her speak, and how he believed in her message, rage strangled Corrie. She could hardly see for the emotion that threatened to drown her. This man had been one of the guards at Ravensbruck, and not just any guard, one of the cruelest. She’s seen him crush a woman’s hand with the butt of his rifle, because she’d been caught stealing some crusts of bread. At that moment she was about to ‘out’
him to everyone present. To see him get his just desserts, but instead God gave her a little more grace and the rage lifted. She was able to forgive, and to take that man’s hand.
Through it all she acted with a breathtaking humility and simple belief that there was no other way that she could have behaved. In 1971 her tale was made into a movie, The Hiding Place. She passed away in 1983 at the age of 91.
I’ve wondered my whole life whether I would be strong if faced with some great trial. Corrie’s story inspires because she was so very ordinary even in her extraordinariness. God’s grace is not a one-time event extended to us only at the time of our salvation. No. His grace will meet us at the point of our need. That was her testimony, that there is no circumstance so terrible that it lessens God’s goodness.
Even in the worst possible place He is still sovereign. He weeps with us, and though we don’t understand why we must suffer, He will give us beauty for ashes, the oil of joy for mourning, the garment of praise for the spirit of heaviness.

I don’t know what situations you face right now in your life. But take heart, God does. He knows and more importantly He cares.
If you haven’t read The Hiding Place, I more than recommend it. The movie is incredibly moving as well. They are both available on Amazon.
I’ll leave you with this interview that Corrie did with Pat Robertson in 1974. It’s a little long at just over 7 minutes, but I think it is worth it.
Posted by Lisa Karon Richardson at December 14, 2009