And even before I was smitten with the author, I was smitten with her leading men: Mr. Darcy, Colonel Brandon, Captain Wentworth…. Sigh. And as anyone in love would do—I spent a great deal of time with—and learned everything I could about—the object of my affection. I watched every Austen adaptation big screen and small, have listened to each audio recording (and have never so enjoyed my lengthy commute), and have read the books themselves. Jane Austen: The Complete Novels also stands on my shelf, lending class to the paperbacks around it, but otherwise useless—the leather volume is so heavy, that when I try to read it in bed at night, my arms begin to shake!

My Austen collection exhausted, I turned to writing my own novels set in “Jane Austen-era England.” I’ve longed to be writer since I was very young, but it was not until my love affair with all-things-Austen that I got serious about the dream. I so enjoyed the world of Pride and Prejudice, Emma, and Persuasion, that I wished to return there again and again. And in this way, I have been, and continue to be, inspired by Jane Austen.

Jane’s books were published primarily in the Regency period, a relatively brief span of years from about 1811-1820. Why are readers like me so drawn to this period? In the pages of Austen, it was a romantic, idyllic time, at least if you had money. Gowns and hats, balls and grand parties, chivalry and carriage rides. And who can resist a handsome gentleman in those tall Hessian boots? 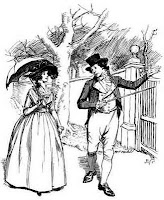 On a deeper level, it was a time when being a true “lady” or “gentleman” was something people aspired to. A time when many in society followed polite rules of conduct and a high moral code. Things not always as evident in our world today.

What about you? Have you read Jane Austen’s novels or seen the movies or miniseries based on them? If so, I imagine you, too, have fallen in love. Perhaps Jane has even inspired you to write, as she has me—and many other authors as well, as the plethora of sequels and fan fiction prove.

In fact, Jane Austen is more popular now than during her lifetime nearly two hundred years ago. And, in a modern high-tech world always eager for the newest thing, Jane Austen’s books enjoy ongoing appeal. Is it any wonder writers like me are inspired by—and long to emulate—Jane Austen?

“She always sought, in the faults of others, something to excuse, to forgive or forget. She never uttered a hasty, a silly, or a severe expression. In short, her temper was as polished as her wit. Nor were her manners inferior to her temper. No one could be often in her company without feeling a strong desire of obtaining her friendship, and cherishing a hope of having obtained it. She became an authoress entirely from taste and inclination. Neither the hope of fame nor profit mixed with her early motives.”

Even allowing for a brother’s understandable pride and prejudice, is seems clear that Jane Austen embodied many qualities that writers—and all of us—might do well to imitate. Is it any wonder I find her inspiring?

Julie Klassen is the author of three novels, Lady of Milkweed Manor (a Christy Award finalist), The Apothecary’s Daughter, and releasing this month, The Silent Governess. She also works as a fiction editor for Bethany House Publishers. Julie is a graduate of the University of Illinois. She enjoys travel, research, BBC period dramas, long hikes, short naps, and coffee with friends. She and her husband have two sons and live near St. Paul, Minnesota.

Olivia Keene is fleeing her own secret.

She never intended to overhear his.

But now that she has, what is Lord Bradley to do with her? He cannot let her go, for were the truth to get out, he would lose everything--his reputation, his inheritance, his very home.

He gives Miss Keene little choice but to accept a post at Brightwell Court, where he can make certain she does not spread what she heard. Keeping an eye on the young woman as she cares for the children, he finds himself drawn to her, even as he struggles against the growing attraction. The clever Miss Keene is definitely hiding something.

Moving, mysterious, and romantic, The Silent Governess takes readers inside the intriguing life of a nineteenth-century governess in an English manor house where all is not as it appears.


The Silent Governess can be purchased at Bethany House, Amazon, Barnes and Noble, Christian Book Distributors, and Books A Million.