But It’s Not About Sports…

This is ESPN Sports Center. You’ll be spending the next five minutes with us. Now we’ll take you to college football. But today we’re watching a different kind of game.
Colt McCoy, senior quarterback of #2-ranked Texas Longhorns, and Tim Tebow, senior quarterback of #5-ranked Florida Gators, lock horns and jaws for the nation’s Heisman Trophy award and collegiate football’s top honors. But outside of their huddles, they embrace as brothers in Christ. 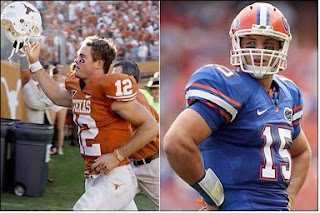 Tim Tebow, the home-schooled son of former missionaries, is lucky to be alive, much less performing on America’s hallowed grassy gridirons. After his mother suffered a life-threatening infection, doctors recommended that she abort little Tim, who would surely be stillborn. What the doctors didn’t know was God had plans for Tim that even a deadly amoeba couldn’t thwart. 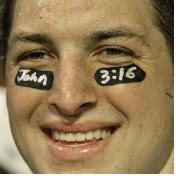 By age six, Tim had begun a relationship with the Lord and regularly traveled with his family to lead crusades and minister in orphanages. Eventually Tebow’s athletic talents gained recognition, and even as a freshman, he started every game at University of Florida. However, Tebow refuses to let a golden arm seize control of his heart. “Every day includes four things: God, family, academics, and football, in that order.” 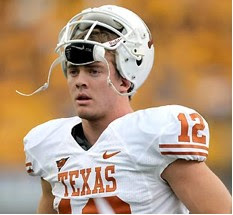 Love of Tuscola farmland and football was hammered into Colt McCoy by his parents, who have raised three sons. From a young age, Colt’s athletic gifts impressed coaches and fans. But at age 14, Colt began cultivating a relationship with Christ and was baptized. From that point, football took an endzone seat to the Lord of Colt’s life. “It’s not about me and never has been,” Colt says. “It’s not about what I do or what I say; it’s about living for Christ and accomplishing His will for my life.”

Tebow and McCoy proclaim their love of the Lord in huddle groups, on and off the field, at FCA camps, and to the media. From Facebook and websites, both young men witness of God’s working in the lives of those wearing jock straps and football helmets. Still, they were just two more sports celebrities to me. Then, for the sake of my son, who wears burnt orange and hangs a Longhorn flag from our porch, I turned on the tube to see both men caught in the throes of season-changing, nail-biting games. One lost. One won. But both were winners in the opinion of this sidelines coach.

When a referee’s flag cost the Longhorns a possession, McCoy ducked his head and hurried off the field without so much as an arched eyebrow. As Tim Tebow’s Gators were wiped out by an explosive Crimson Tide team, Tebow continued to battle red-jerseyed opponents, then embraced teammate and opponent alike and shed silent tears on the sidelines. What I didn’t see from Tebow and McCoy—grimaces, groans, and excessive end-zone celebrations—spoke as loudly as what I did see—men respected by teammates, opponents, coaches, and fans.

What else do I see in Tim Tebow and Colt McCoy? Classy young men wearing the armor of God during times when the lives of sports superstars have become littered with drugs, sexual escapades, even violence. Men who continue to place God as Lord of their lives above America’s great love, sports. I’ve joined my husband and son, sports fans, in tipping a hat to young Christian men who just happen to wield footballs with cannon arms.

On December 12, Tim Tebow and Colt McCoy finished fifth and third as candidates for the 2009 Heisman Trophy, indisputably college football's greatest individual award. On January 7, McCoy’s Texas Longhorns will battle the Crimson Tide that defeated Tebow’s team for the BCS title game. Tebow and his Gators face Cincinnati on January 1 in the Sugar Bowl.

Quite a bowlful of treats for a Gator and a Longhorn, huh? That’s it for ESPN. But it’s only the start of a bounty of eternal blessings in the lives of two young men who call on Christ as Savior.