This is Missy's 2nd book set in Magnolia, Georgia with their commonality of The Forever Tree. I find this concept fascinating. In each of Missy’s books, the couples who hold hands around the Forever Tree as youngsters find themselves drawn together as adults and the local myth is proved true. At least it did in the last book. 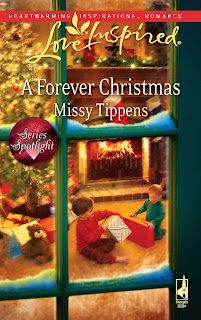 In A Forever Christmas, Sarah Radcliffe returns home for the Christmas holidays earlier than normal because of a tragedy. Disillusioned and angry with God, she’s hoping to find peace and renew her spirit but instead she’s thrown into community service when her friend’s advancing pregnancy means they need a director for the local church pageant. Sarah accepts the task when it becomes clear there’s no one else to take the job. After all, she has time on her hands and as a kindergarten teacher used to handling young children, there’s no real reason for her to refuse.

That is until she interacts with two endearing boys and discovers they belong to Gregory Jones. Every other time Sarah’s come home, she’s managed to avoid Gregory, the young man she held hands with around the Forever Tree. Sarah may still be single but it doesn’t mean she wants to renew a relationship with the man who betrayed her in high school.

Gregory can’t believe the new pageant director is Sarah Radcliffe who apparently still has the power to render him speechless. As a young man from the other side of the tracks, Gregory had been awed by Sarah’s status and the mansion she lived in. At the first sign of adversity, it hadn’t taken much to break the fragile thread holding them together.

Now, over ten years later, Gregory is a divorced father with two small sons who depend on him. Already deserted by their biological mother, the marriage and subsequent move of Gregory’s sister away from the boys have put them in a state of depression. Gregory feels the answer to their happiness lies under the Christmas tree and is working extra hours to provide material gifts for them.

Because of the recent loss of one of her own small students, Sarah knows Gregory will regret not spending quality time with his boys if anything should happen to them. She’s determined to make workaholic Gregory see what he’s missing even if it means spending more time with him herself.

What Sarah doesn’t realize is that maybe her parents had something to do with Gregory’s betrayal way back when and if she finds herself falling for him again, the old circumstances may still be in effect.

I cried several times while reading this book. From the sorrow of her lost student to the desertion of the boys’ mother, Missy went deep into the emotions of her characters and made me feel what they were feeling. Seeing how easy it was for Sarah to allow the actions of her parents to screw up her life made me realize how easily it could have happened to me. Not that my parents were well off, but they certainly didn’t agree with my choice of a life mate.

I believe this is Missy’s best book so far. When I closed the back cover, I was satisfied at having been part of an inspiring story. Missy doesn’t designate A Forever Christmas as part of a series and I don’t know if there will be any further Forever Tree stories, but no matter what she writes, I’ll be standing in line to buy it.

Here are Missy’s books which use The Forever Tree:

You can find out more about Missy’s books at http://www.missytippens.com/.

Up here in Canada, it's Boxing day today which equates to big shopping sales. But I think I'll huddle in my prairie home and spend some time with my children.

Did you get what you wanted for Christmas? Care to share?
Posted by Anita Mae Draper at December 26, 2009