from Jennifer AlLee
Hold onto your hats, folks. I'm doing a review today. But it's not about book. And it's not about a movie (although I'm using the movie review header because I failed to give Lisa - designer supreme - a head's up that I was doing this).

The series in the spotlight: CASTLE

Richard Castle (Nathan Fillion) is a well-known mystery writer who's just killed off the main character in his successful series. Thanks to his friendship with the mayor, he's paired up with NYPD homicide detective Kate Beckett (Stana Katic) so she can be the inspiration for Nikki Heat, the heroine in his new series.

Let me confess right now, my initial motivation for watching this show was Nathan Fillion. The Canadian-born actor is a favorite of mine. I remember watching him many years ago when he played the original Joey Buchanan on One Life to Live. He was awesome playing Captain Mal Reynolds on the prematurely canceled sci-fi series, Firefly. And let's not forget his comic musical turn in the Joss Whedon internet hit, Doctor Horrible's Sing Along Blog. Yep, I'm a Fillion fan. 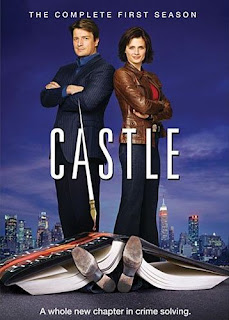 But there's so much more about this series to love. Since he's a writer, we get to see Castle struggle through the plotting process, even while he's pondering the latest case. But my favorite parts are the inter-personal relationships. Castle lives with his teenage daughter, Alexis (Molly Quinn), and his socialite actress mother, Martha Rodgers (the fabulous Susan Sullivan). The interplay between these three characters is wonderfully real. The love and concern that Rick has for Alexis is touching. For her part, Alexis is the level headed one, often giving solid advice to both her father and grandmother.

In the role as Beckett, Stana Katic gives us a strong, resourceful woman who is always professional, but still feels deeply. Because of the unsolved murder of her own mother, Beckett empathizes with the families of victims. And while Castle started off as a burr under her saddle blanket, she's developed a respect for his deductive reasoning skills... and his cute smile, I'm sure.


The dialog in Castle is crisp, often funny, and usually very natural. Of course, it's stretching the premise to believe that a writer would be allowed so much access to crime scenes and investigations, but that's part of the fun. When Castle accompanies the detectives to a location, they all wear vests that say POLICE. His vest says WRITER. We're all in on the joke. And I want to know where I can get a vest like that.

A new episode of Castle airs Monday, January 11th on ABC. Check your local listing for the time.

Question: Is there a TV show that you never miss?