Book Review: The Maverick Preacher by Victoria Bylin,
Love Inspired Historical Feb 09
I bet you’re looking at that date and thinking I typed it wrong, eh? Nope. I am way behind in my book reviews, but there really is a reason for telling you about it today . . .

The author, Victoria Bylin, has a new release coming out in March and I thought I'd get you all interested. You see, Victoria Bylin is one of my favorite authors. I will buy anything this lady writes. And no, she didn’t pay me to say it. I started reading Vicki’s books before Steeple Hill started publishing the Love Inspired Historical line. At that time, Vicki wrote for Harlequin Historicals. On her website, Vicki gives an account of those books: 'My HHs all have inspirational themes, but they do NOT comply with CBA standards. Reader beware! These books were written for a secular audience. They’re about saints who’ve stumbled and sinners who’ve made terrible choices. They have rough language and love scenes. I don’t recommend them for younger readers unless they’ve already crossed lines I wish they hadn’t. These books were written for mature women already accustomed to mainstream romance.'

I’m not going to get into the issue of how a believer can write for the secular market because that’s Vicki’s story to tell which she does on her website. You’ve just read a part of it and you can read the rest here .

Although Vicki now chooses to write inspirationals, her books are filled with as much conflict, emotion and drama as her earlier non-CBA books. Personally, I think it’s the ‘. . . saints who’ve stumbled and sinners who’ve made terrible choices’ that keeps me going back to her books regardless of the publisher. Her characters are real. And flawed. And vulnerable.

Vicki’s heroes are men who’ve fallen and understand weakness can wreak havoc in your life. They’re men who’ve strived to rise above their frailties to become worthy of the women they love.

Her heroines are strong in spirit and faith. They work hard and fall in love hard – usually against their better judgment.

God’s plan is woven into every story Vicki writes. You know her characters are God-fearing people. It’s just that we’re all human and stumble along our daily walk and Vicki’s characters are the same way. There are no perfect people. Only God’s perfect love and He uses it to nudge her characters along. 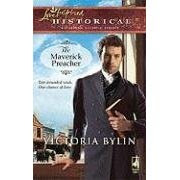 In The Maverick Preacher, the hero is Joshua Blue. Once one of Boston’s most righteous preachers, Joshua drove his own sister away when she committed what appeared to him as an unpardonable sin. He called her a Jezebel among other names and threw her out of his moral mansion. Leaving his hypocrisy behind, she fled west carrying only the baby in her womb and some jewelry.

A few days later while working on a sermon about the woman at the well, Joshua underwent a revelation. His sister had gone to him for support and he’d been the one to cast the first stone. And the last one, too. Driven by guilt, he resigns from the big Boston church and follows his sister’s trail. Trials face him along the way proving no matter how low you think you’ve fallen, there’s still room to drop. Along the way he hears about a boarding house for troubled women in Denver and decides to check it out.

Late one night, Adelaide Clark hears a thump at her door and wonders if it’s another battered woman. She opens it to find a man lying on the stoop. Gaunt and desperate, the man, Joshua, convinces her to let him board with them. Against her own rules, she agrees. It doesn’t take long for her to wish she’d turned him away when he starts questioning her about his sister and the child she would have had by now.

Thank goodness neither his, nor his sister’s names mean anything to Adie. She truthfully tells him she never met his sister. Yet, his story is startlingly similar to the woman Adie befriended back in Kansas. The woman who – before she died – made Adie promise to raise her son as her own and never give him over to her pious, powerful brother. No one in Denver knows the child isn’t hers and she’ll do anything to keep it that way.


If you find a copy of The Maverick Preacher, I know it will give you a satisfying read. I bawled like a baby while I read it. Her books just hit that emotional chord in me. 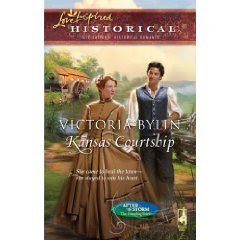 In March, Vicki has a new release through Love Inspired Historical called Kansas Courtship. It’s Book 3 in After the Storm The Founding Years and it’s her first experience at writing a multi-authored series.
Fun question today:  Without checking amazon or christianbook, etc, take a guess at the professions of the 2 people on the Kansas Courtship book cover. Or, if you want, name a profession you'd like them to have.
For more info, visit http://www.victoriabylin.com/
Posted by Anita Mae Draper at February 06, 2010