by Susanne Dietze
Have you ever worn a song before?

No, I don't mean a concert t-shirt, emblazoned with song lyrics. I mean metaphorically worn a song, donned it like a coat and allowed it to stick to you closer than static-tight socks. I’m not talking about “ear bugs,” either, those songs and TV jingles that get stuck in your head and never leave, but rather the songs that contain something particular you want to embrace, words that keep you afloat, like a life vest.

Before I face the woolly world each morning, I’ve been known to "wear" a song along with the Armor of God. After plunking the helmet of salvation on my head and strapping the Word of God into my invisible scabbard, I remind myself of a verse of Scripture that's appropriate for me and my day. And then I put on a song, clinging to lyrics I need to hear.

And I wear these verses and songs throughout the day – that is, I hold tight to them. Clinging to Scripture and God-honoring Christian music (like the “Psalms, hymns and spiritual songs” Paul mentions in Ephesians 5:19) help me focus on the Lord, directing my thoughts to those which are more appropriate to a Child of God than the wimpy worries my fearful little noggin tends to favor. 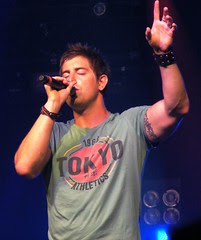 Image by f_shields via Flickr
For a while, Jeremy Camp’s “Walk by Faith” was one such song.

Four or so years ago, I was already a Jeremy fan. Already had his CDs and knew his songs by heart. I was driving around one afternoon, hauling noisy children hither and yon (which sounds more fun than carpooling to soccer and art), and in the little private cage of my brain, I was stewing. I remember exactly what was bothering me, a problem so small that you’d laugh if I shared it, but even then I was fully aware that a bigger worry worsened my tiny fear. That day, I was fretting over something small because it was easier than admitting I was afraid of something larger: a very big change in my future.

As I was driving, something happened. Now, I am not suggesting that the Lord moved the deejay of my local Christian radio station in order to speak to little ol' me, but as I was driving and worrying, “Walk by Faith” came on over the airwaves. The Holy Spirit rattled the lock on my little cage of fear at the first lines of the song:

Will I believe You when You say
Your hand will guide my every way?
Will I receive the words You say
Every moment of every day?*

Gulp. I knew what that meant. Could I say that I believed in God, yet not believe Him when He says He’s faithful? Will I trust Him when He says He’ll provide for my needs? Do I honestly accept that He loves me and has spoken Truth in His Word? Because I knew Proverbs 3:5-6 pretty well, but I didn’t seem to be acting like I believed it:

Trust in the Lord with all your heart and lean not on your own understanding; in all your ways acknowledge Him, and He will make your paths straight.

You may know that when he wrote “Walk by Faith,” Jeremy Camp was on his honeymoon. It was not a carefree vacation, nor a worry-free celebration of a new marriage. Jeremy's young bride, stricken with terminal cancer before their engagement, had weeks to live. Jeremy was angry, wounded, and desperate, grappling with the horror of becoming a widower at age twenty-three. He wrestled with God, begging for help, or answers. Something. Anything.

If you’ve ever read an interview with Jeremy or seen him in concert, you’ll know that the death of his first wife is a major part of his moving testimony. He shares openly about his struggles, grief and questioning. Through this dark time, however, he relied on God to get him through. He came to understand that he needed to trust God, to keep taking steps forward even when he couldn’t see the road ahead through the darkness. 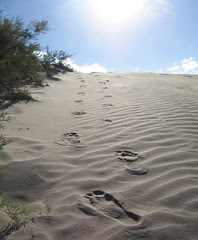 Image by Seryo via Flickr
God used Jeremy’s testimony to teach me something essential. The time had come for me to decide if I truly believed in God's promises or if I just pretended to. I needed to step out, even though I didn't know where He was leading me, because God was already at my destination, faithful to meet me exactly where I was.

And so I started wearing “Walk by Faith,” wrapping its lyrics about me like a warm, fur-lined cloak as I stepped out into the cold unknown. I decided that I would cling to God’s promises of faithfulness, love and compassion. I sang:

I will walk by faith, even when I cannot see
Because this broken road prepares Your will for me.*

It isn’t the song that changes our lives, is it? It’s the One who meets us where we are, and allows something like a song to be used to guide us.

I hope you enjoy this video of Jeremy singing “Walk by Faith” from his DVD/album, Unplugged. Keep your eyes peeled for Adie Camp (Jeremy's talented second wife) singing backup.

Questions: Have you ever “worn” a song?

Meeting Jeremy Camp in person was awesome (read about it here). Have you ever been able to meet someone whom you admire?