The Music of Memories

by Debra E. Marvin
I can still hear my grandmother’s voice singing the old hymns. My grandparents lived with us when I was growing up and we attended the local Presbyterian church. I don’t have to tell you that grandparents are special to children and I’m not just saying that because I’m a grandmother now, either. They’re like parents, only better. They have time.

Being an only child, grandpa was my playmate. We read together, played games and my ‘record player’ together, often while mom and grandma went out shopping. Things changed a lot when I was seven. He died of heart disease. But I still had my Mimi.

Jump forward to the mid 80s. My children knew her as the old woman whose mind had become confused and who spent so much time in front of a television, but took great joy in tickling them. She seemed to subsist on tea and cookies more than any other food group. And yet once in awhile, thankfully, her sassy, fun-loving nature showed through.

I believe music is heard in the soul and rises out of the spirit. We can recall silent notes and reproduce them in pitch. Our father God created music for His pleasure and being made in His image, our souls respond. While I love the new contemporary worship and praise songs (I couldn’t decide which Casting Crowns songs to pick), I chose an old favorite. 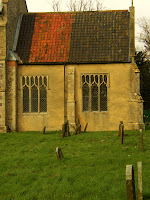 When we sing the old hymns, we are sharing history with ancestors--across country borders, across denominational lines, through every joy and grief found in the human condition. A small country parish in Nebraska, or magnificent cathedral in Europe. It doesn’t matter. We may not sound like angels, but we share their chorus. In God's dimension beyond time, music endures, a never-ending melody that is a language of its own.

We raise our voices and join all those who’ve preceded us on this spiritual walk. Joy rises on the wind, and tears fall.

So.
Sunday afternoons, I’d take my children to visit Grandma Mimi in the nursing home. A couple times a month, a middle-aged couple did church service. They really invested in getting to know the residents, gave a little message and led them in hymns. The mind remembers notes and lyrics. When my grandmother eventually forgot who I really was to her, she still knew the words.

One of the residents was a tiny woman; her voice as stereotypical ‘little old lady’ as they came. Above all those reedy voices, you could hear her high pitched notes. Funny as it might be, and often was, there was something about hearing those elderly residents singing a hymn. To this day, I have a hard time with "The Old Rugged Cross". It’s hard to sing when you’re choked up, isn’t it? But there’s a joy in knowing that a song has linked us all together over decades and across the planet. And it brings my grandmother back to me.

One last thing. A few months ago, I went through my mother’s personal things after she, too, moved into a nursing home. This included several old jewelry boxes. I almost put the last one aside, but opened it, took out a few pieces—vaguely familiar—and then the most amazing thing happened. I realized it was my grandmother’s jewelry box. Because it smelled like her. Our minds are amazing, aren’t they? It seems that notes and lyrics and fragrances are really just memories waiting to transport us. So I leave you with this song. 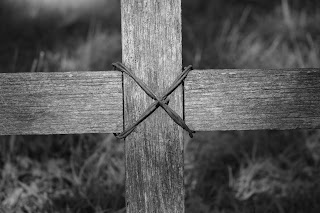 On a hill far away stood an old rugged cross,
The emblem of suffering and shame;
And I love that old cross where the dearest and best...For a world of lost sinners was slain.

O that old rugged cross, so despised by the world,
Has a wondrous attraction for me;
For the dear Lamb of God left His glory above
To bear it on dark Calvary.

In that old rugged cross, stained with blood so divine,
A wondrous beauty I see,
For ’twas on that old cross Jesus suffered and died,
To pardon and sanctify me.

To the old rugged cross I will ever be true;
Its shame and reproach gladly bear;
Then He’ll call me some day to my home far away,
Where His glory forever I’ll share.

Do you have a ‘memory’ story to share? How has a song or a fragrance brought back a loved one to you? What's your favorite 'old hymn'?

Thank you for visiting today
The Old Rugged Cross was written by George Bennard in 1912 or 1913. Seems no one can agree. It is in the public domain.