Mansion Over the Hilltop

As soon as I saw this theme, I thought of sitting with my Finnish grandmother and singing Mansion Over the Hilltop. 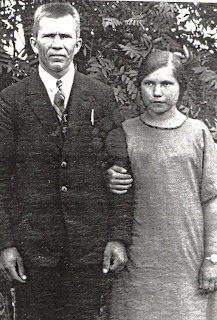 My grandparents emigrated from Finland to Northern Ontario in 1930. We were raised to call them Mum-ma and Pup-pa which means old woman and old man in Finn. To me, they were unique because they never bathed. Instead, once a week, they gathered towels, soap and clean underwear and walked down the railroad tracks to visit the neighbor’s sauna.
Mumma knew Jesus. She’d found Him as a young girl when missionaries went to their small village. In her memoirs on my cousin’s website, Mumma said, ‘when I was twelve years old, there were Mission girls (ladies) in my village. I loved to go to their meetings. There are all kind of obstacles, when I didn't know what to do, I prayed to God to forgive me all my sins, and He helped me all these years. I gave God my life, and wanted to please Him in every way. I became a Christian, born-again Christian.’

Mumma once told me she’d go home after the meetings and her family would laugh at her. She was the only one in her family to believe in Jesus but she knew in her heart He was real and she wouldn’t let anyone talk her out of her belief. This is my heritage. Faith in the face of unbelief.

I remember visiting Mumma when I was about 8 and she took me to worship with her. Since there wasn’t an evangelical church around, the service was held in the living room of a believer in town. I have this image of myself sitting beside Mumma, hymnbook in hand, singing Mansion Over the Hilltop. From the first time I heard it, it called to me. Maybe it was because the farm still didn’t have electricity. We used oil lamps for light and a woodstove for cooking and heat. Cold water came from the well and had to be heated which meant we fed the woodstove all day even during the dog days of summer. Yes, that meant there wasn’t any indoor plumbing. Chamber pots at night if you really needed to go and an outhouse with a diamond window in the door for the daylight hours.

Mumma was always humming and singing hymns whether she was at the farm, in town or at our place 6 hrs to the west.

When I was 12 yrs old, I had the privilege of spending the whole summer at Mumma’s farm. Of all the times of my childhood, this one stands out as magical. The freedom of the farm, learning to drive Puppa’s old Cockshutt tractor, reading the afternoon away. And spending time with Mumma. I remember sitting in her sunny kitchen while flies buzzed against the window and danced against the fly tape hanging in the corner. Embers snapped in the woodstove just feet away. Beside the stove was the door to the lean-to where we washed our faces and hands and Mumma did the laundry. We always laughed because the room was sinking and you had to step down into it, leaving that back corner of the kitchen stove without support. Scary when I think about it now, but nothing unusual back then. 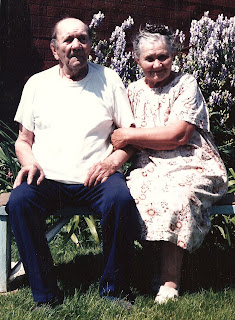 Mumma would sit in her kitchen chair, ankles crossed and swinging her legs, smiling. She had this little girl look to her where she’d duck her head as if shy and her shoulders would shake. ‘He he he,’ would spill out of her. Not a giggle and not a laugh but something unique in between. And then she’d say in her heavy Finn accent, “Un-nita, you know Yea-sous loves you.”

I’d smile and nod because yes, I did know He loved me.

And there in that little farmhouse without electricity or plumbing, with the floors sinking and the walls leaning, she’d sing about a mansion on a hilltop where the streets were paved with gold.


I accepted Christ as my own personal Savior that same summer.  Mumma is gone now but her legacy of faith lives on in my own children.