After the Darkness, Light…

The Begotten, The Betrayed, The Blessed.
The Gifted Trilogy by Lisa T. Bergren
An ancient secret. Dark forces that want to keep the secret hidden at all costs. An unlikely group of God’s faithful followers who are willing to stand up to those dark forces…

If you love history, adventure, romance, sweeping landscapes, and spiritual truths, The Gifted Trilogy by Lisa T. Bergren, set in 1339 Italia is a must-read series that sweeps readers from Roma to Provence, and so many wonderful places in-between.

In Corinthians, Paul speaks talks about spiritual gifts. What if there was another letter written by Paul, one that didn’t make it into the Holy Scriptures? A lost letter that once revealed, foretells the gifted, whose powerful gifts include healing, wisdom, miraculous powers, visions and faith?

Lisa Bergren plunges readers directly into the intrigue as the series opens in Constantinople, in 731, where a faithful monk is willing to lose his life over his divinely inspired illuminations of a letter that appears to have been written by the Apostle Paul. The monk's determination sets into motion a series of events that, centuries later, will bring an unlikely group of people together on a holy journey.

1339 Roma…
While Lady Daria d’Angelo is taking refuge at a convent to heal from her broken heart she makes a surprising discovery. She has a gift of healing. A woman of incredible faith, Daria immediately recognizes this is a spiritual gift from God. Father Piero, a priest at the convent, also recognizes the gift and soon takes Daria into his confidence. She is one of the gifted.

Daria agrees to go along with Father Piero on this journey. As they leave the convent, they come upon an injured knight. Gianni de Capezzana, captain of the Knights de Vaticana, was on a mission to find the sorcerer, when he was wounded and left for dead. After his encounter with Daria, Gianni pledges his loyalty to her and withdraws from his service to the church. Gianni has a strong belief that God wants him here, guarding Daria from an unseen, but very real danger.

As the gifted ones begin to slowly discover each other, dark forces converge to conspire against them. Danger lurks everywhere, and Lisa Bergren doesn’t spare her characters with an easy out. After the darkness, light, becomes a concept they use to keep pushing forward as, for the glory of the Lord, they search for the strength to face their evil foe with their eyes focused on Him.

I must confess I’ve been a little apprehensive about presenting this recommendation, simply because this series is so captivating and powerful that I don’t want to risk doing a bit of injustice to the books or the author. The descriptions are breathtaking, the action heart-pounding, and the truth soul-stirring.

The journey begins in The Begotten. The battle is fierce in The Betrayed. Events happen in The Blessed that I never would have expected. Without giving anything away, as cliché as it sounds, the book lived up to the title and I truly felt blessed while reading it. In fact, several weeks ago, fellow Inky Dina Sleiman asked if we’ve ever read a book that changed our lives. I was reading The Blessed at the time. It honestly changed something in me and opened my eyes to a new way to think about something I’ve been struggling with.

The Gifted Trilogy is an incredible series, and so worth every minute spent within the pages.

You can visit Lisa’s website at: http://lisatawnbergren.com/, where you can read about her back list, her upcoming books, and so many other fun things. Lisa’s newest book, Waterfall, is the first book in her River of Time series. 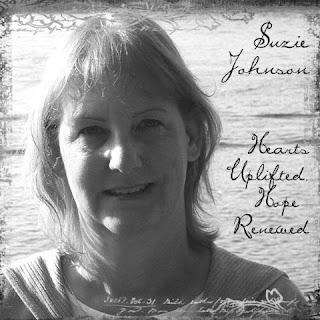 Suzie Johnson has won several awards for her inspirational novels (writing as Susan Diane Johnson), including the Maggie, Lone Star, Heart of the West, and Beacon awards, as well as finaling in the Touched by Love, Finally A Bride, Linda Howard Award for Excellence, and Virginia’s Fool For Love contests. She is a member of ACFW, RWA, and is a cancer registrar at her local hospital. The mother of a wonderful young man who makes her proud every day, she lives with her husband and little kitten on an island in the Pacific Northwest. And although the beaches are rocky instead of sandy, lined with Madronas and Evergreens instead of Palm trees, and the surf is much to cold for wading, it is still the perfect spot for writing romantic fiction. You can visit her blog, Suzie's Writing Place at http://suzieswritingplace.blogspot.com/.
Posted by Suzie Johnson at March 19, 2011