The Hurricane That Inspired Shakespeare and Birthed a Nation 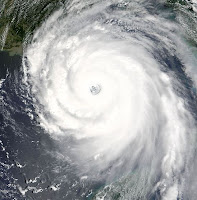 If you live anywhere near a US coastline, you've probably made hurricane preparations at some point or another. Mine tend to involve filling the bathtub with water, the chain saw with gas, and the pantry with non-perishables. Oh, the wonders of satellites that allow us to predict and prepare for major storms! Can you imagine how terrifying it must have been for the people who lived in centuries past, when such storms struck with little or no warning?

By the spring of 1609, the investors of the Virginia Company decided a new strategy was needed to make their fledgling North American colony successful and profitable. Their venture to establish a New World colony in 1607 had proven more difficult than expected, with the company experiencing higher than expected costs -- and mortality rates.

Historians now believe many of Jamestown's troubles stemmed from the Company's incredibly bad timing. The Company intended for the colonists to trade with the local tribes (the powerful Powhatan confederacy) for their foodstuffs. 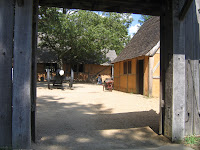 Unfortunately, the earth had entered a cooling period we now refer to as the "Little Ice Age," a time of shortened growing seasons and severe crop failures. Tree rings from the time period also indicate Virginia suffered a prolonged drought during those same years. In short, the Powhatans weren't eager to trade away their meager foodstores, no matter how amusing they found the brash John Smith or how useful they found the English metal tools.

And thus, the venture of 1609, which called for a restructuring Jamestown's government and a massive infusion of settlers and supplies. An estimated 600 colonists left Plymouth on nine heavily-laden ships. After a mostly uneventful crossing, disaster struck one week out from Virginia when the ships sailed into a monster storm, probably an early hurricane. 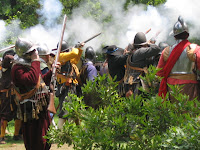 Only seven of the ships reached Jamestown. Among the missing was the Sea Venture, the flagship of the flotilla which carried all the officers for Jamestown's new government, including Admiral Sir George Somers, Governor Sir Thomas Gates, Secretary William Strachney, and a young gentleman named John Rolfe. To make matters worse, the crews of the surviving ships had jettisoned much of their cargo during the storm. Famine, disease, and dissension quickly set, exacerbated by deteriorating relations with the nearby Powhatans who besieged the ill-supplied colonists in their fort. By the spring of 1610, "The Starving Time" had wiped out nearly 90% of Jamestown's inhabitants.
And then came relief from a most unlikely quarter when the Sea Venture crew and passengers sailed into Jamestown, nine months after the hurricane.
Blown off course by the storm, Captain Christopher Newport had steered his foundering ship onto the rocky reefs of Bermuda to keep her from sinking. All 150 passengers -- and the dog -- made it ashore safely. In 1609, Bermuda was an uninhabited island shunned by Europeans because of her dangerous shoals and the belief she was haunted by devils. On this tropical island paradise, the Sea Venture survivors found wild hogs, birds, and fruit. Combining salvaged parts of the ship with timber from the island, they spent the winter building two small pinnaces aptly named Deliverance and Patience, and sailed them to Jamestown the following May. The provisions they brought from Bermuda supplied the colony with food until more ships arrived in June.
﻿ ﻿﻿

William Strachney wrote an account of the Sea Venture's Bermuda experience. "A True Reportory of the Wreck and Redemption of Sir Thomas Gates, Knight" circulated London and became the inspiration for Shakespeare's last play, The Tempest.
Admiral Sir George Somers returned to Bermuda and died on the island in November of 1610. Somers Islands is still Bermuda's official name.
Captain Christopher Newport died on a voyage to the East Indies in 1617. The city of Newport News and Christopher Newport University (both in Virginia) are named for him.
John Rolfe settled in Virginia. There he experimented with new strains of tobacco and developed the colony's first successful cash crop. His 1614 marriage to the Powhatan princess Pocahontas brought a measure of peace between the two peoples. Today, approximately 100,000 Americans trace their ancestry to this couple.
Jamestown's survival ensured that the English would found more colonies in North America.
﻿

One wonders, had the Sea Venture arrived in Jamestown as scheduled, would her passengers have suffered the same fate that winter as the other colonists? Perhaps, just perhaps, the hurricane that sent the Sea Venture to Bermuda saved Jamestown -- and ultimately, the United States as we now know it -- from a fate similar to that of the short-lived Roanoke and Popham colonies.
Can you think of other events, perhaps from history or even your own life, when a seeming tragedy turned out to be a blessing in disguise?