As a writer, I spend much of my life searching for just the right word for the situation. Should I have my character walk, amble, stride, pace, saunter, or creep into the room? I've often said that if only I read my Bible as much as my thesaurus...well, you can probably guess. This week, I learned a new word:
Thanatophobia: noun, the fear of death

Many years ago, I read the book, The Victorian Celebration of Death. To be honest, I no longer remember much of it—except for one thing that particularly captured my interest. The author compared Victorian customs surrounding death with those of our “modern” era. While the Victorians had elaborate rituals (special clothing, ink, stationery, etc.), we moderns tend to pretend death doesn’t exist. Three days of bereavement leave, and then back to work you go as if nothing happened.

In fact, I had that experience once. After a sudden death in my immediate family, I called into work. I told my boss what had happened. She granted me leave, then cut the conversation short. Very short. I hung up, rather disturbed. Perhaps she was only busy, but I always suspected a deeper reason at work.
It strikes me that many in our culture suffer from thanatophobia. And why wouldn’t they? We live in a post-Christian society. The future is a frightening place when it holds only emptiness. Better to pretend death doesn't exist than face our fate. For what meaning does life have if there is nothing beyond our few decades on earth?

As it happens, last week I reached the point in my book where I had to kill a character. Mind you, not a nice character, but the one my family refers to as the Slimy-Guy-Who-Deserves-to-Die. No one is going to morn his death--well, except his grandmother. (Note from the suspense writer: these are the best kinds of characters to kill because everyone is a suspect.)

But doesn't that title--the Slimy-Guy-Who-Deserves-to-Die--describe each and everyone one of us? We are all guilty of sin [Romans 3:23] and the punishment for sin is death [Romans 623]. Considering what would await us if we got all that we deserved, thanatophobia should be a universal affliction.

But fortunately, Jesus conquered death and saved us from thanatophobia.  O death, where is thy sting? O grave, where is thy victory? [I Corinthians 15:55 KJV] 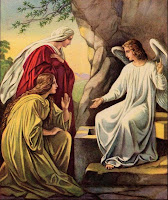 I recently attended a funeral. Now as funerals go, this was the best kind—the deceased was a 92-year-old Christian widow of a pastor who left behind a legacy of family and faith. Yes, there was sadness, but there was also celebration--lots of uplifting music and a reading from Revelation.

And I heard a loud voice from the throne saying, “Look! God’s dwelling place is now among the people, and he will dwell with them. They will be his people, and God himself will be with them and be their God. He will wipe every tear from their eyes. There will be no more death or mourning or crying or pain, for the old order of things has passed away.” [Revelation 22:3-4 NIV]

Many Christians are observing the beginning of the Lenten season. Even if you come from a tradition that doesn’t formally observe Lent (like I do), you can still take these weeks leading up to Easter to reflect on God's grace--the grace that saves us from thanatophobia.

For to me, to live is Christ and to die is gain. [Philippians 1:21 NIV] Imagine that! With Christ, we have a win-win situation, both here and forever afterward.

After leaving the corporate world to stay home with her children, C.J. Chase quickly learned she did not possess the housekeeping gene. She decided writing might provide the perfect excuse for letting the dust bunnies accumulate under the furniture. Her procrastination, er, hard work paid off in 2010 when she won the Golden Heart for Best Inspirational Manuscript and sold the novel to Love Inspired Historicals. Redeeming the Rogue was an August, 2011 release. You can visit C.J.'s cyber-home (where the floors are always clean) at cjchasebooks.com
Posted by C.J. Chase at February 26, 2012