There's an ongoing discussion amongst those who write Christian Fiction (that is, fiction written with a a Christian world view). Who exactly are we writing for? Who is our audience? 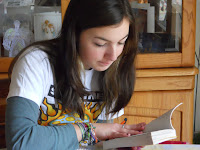 Some authors are firmly in the "I'm writing to spread the Gospel" camp. These books usually have a great deal of overtly Christian content, such as Bible passages, discussions about faith, and conversion scenes. These authors believe that their books need to speak to the lost. They want to spread the news of salvation through Jesus Christ with a hurting, broken world.

Other authors take a more subtle approach. They want their books to appeal to a wide audience. They aren't denying their faith, but they aren't waving it like a banner, either. These authors may also wish to push the envelope, showing the grittier side of life and dealing with hard subjects that make many Christians cringe. These authors want to touch people where they are, and generally believe that actions speak louder than words.

So which group of authors have it right? Both, I think. And neither.

Ironically, the books with the least overt faith message are the ones that are most likely to get in the hands of non-Christians. It reminds me of the song They'll Know We Are Christians by Our Love. Sometimes, people learn more by the way they see us live our lives than when we tell them how they should be living theirs. The same goes for books... the admonishment to show, not tell.

Don't get me wrong. I think an author has to follow his or her gut. If the book needs a conversion scene, then, by golly, it should have one. The worst thing that could happen is that we end up preaching to the choir. And sometimes, the choir could stand to hear a little preaching.

What do you think? Where do you buy your books? What kind of approach do you prefer in a Christian novel?