What I Love About the Kindle Fire

I am not usually one to jump on the latest/greatest techno fad. I was late getting an iPod. I was one of the last people in my circle of friends to get a smart phone. I still don't have GPS in my car. But... when I heard about the Kindle Fire - Amazon's answer to the table - I jumped on it. For the first time, I pre-ordered the latest/greatest gadget. And what fun it has been. 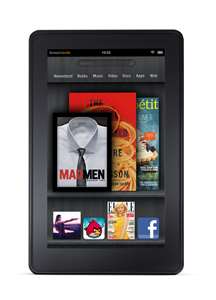 The Kindle Fire is a full color, touch screen tablet. It's smaller than an iPad, and in all honesty, doesn't have quite the range that the iPad does. However, at $199, it's much cheaper than the iPad, and it does everything I want it to do. And what DO I want it to do? I'm glad you asked...

Being that it's a Kindle, you know it's an e-reader. And while I have read some books on it, I still prefer reading books on my original Kindle. I find the e-ink display of the original much easier on the eyes. HOWEVER... I am loving reading magazines on the Fire. I currently subscribe to the paper version of Entertainment Weekly, so by downloading the free app, I can read the e-version on my Fire. Let me tell you... IT IS AWESOME! There are lots of interactive features, like being able to touch part of the screen and see additional information. Of course, the marketing genius in this is that you can be reading a music review and with a tap of the screen be taken to the Amazon store where you can buy said album. To quote the soon-to-be-eaten velociraptor hunter in Jurassic Park... Clever, girl.

It it has a web browser, so I can check my email and Facebook and any other stuff I want to, as long as I can connect to WiFi. But I don't surf the web that often. I spend enough time doing that on my laptop, thank you very much.

My number one, most fun thing to do on the Kindle Fire is... play games. Yes, I admit it. I purchased the Kindle Fire strictly for fun, and that's what I'm having with it... fun. My favorites are Plants VS Zombies and Angry Birds (original, Season, and Rio versions). Yep, I'm a simple gal. Between my games and my paperless magazines, I'm a happy gal.

So, is there anything I don't like about the Fire? Oh sure.
Despite these little issues (and they are little to me) I'm loving my new toy. I will admit, I worry about how many people may be put out of work once electronic magazines gain popularity, but perhaps that will create more jobs in the forest service to take care of all those trees we'll be saving. At any rate, I'm a Kindle Fire fan.

How about you? If you have a Fire or other tablet, what's your favorite thing about it? Or have you sworn off the tablet/e-reader craze?