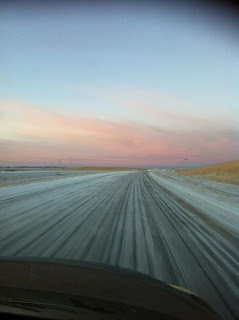 Last weekend, the family and I left our farm at 4 am and drove west on the TransCanada Hwy#1 471 miles (758 km) to Calgary, Alberta. Near Swift Current, we encountered slippery roads - emphasized when a pickup pulling a trailer spun off the highway in front of us. As you can see in this photo, the median between the divided highway is quite wide and shallow, so the driver didn't flip or roll.
We arrived in Calgary by mid-afternoon and went straight to Rocky Mountain Bible College to watch our daughter practice her 2 hr choir session. By 7 pm, we were back on the road - our daughter, Jessie included - and headed another 183 miles (295 km) north to Edmonton, the capital of Alberta. Again, halfway there we encountered roads slippery with slush while sleet slowed the heavy traffic, and finally arrived at 10 pm. Even with the 2 bouts of icky weather, we'd been blessed to arrive safely. It was the end of Jan on the prairies, after all.

Friday morning saw the Nelson and Nick head out to the BreakForth Praise and Music Conference which was a short 15 min walk from our hotel, along the park with a view of the river valley.

I wanted to visit the History Museum, but Jessie and JJ wanted to check out West Edmonton Mall (WEM). Since this was Jessie's only day to sightsee, I gave in and drove the two teens to North America's largest shopping mall. I mean really, what teen wants to see a stuffy history museum when they can shop in the 5th largest mall in the world. I've been calling it the world's largest mall without realizing it lost that distinction in 2004.

And then this from the CBC 1985 archives: With eight major department stores, seven amusement parks, a chapel, a bingo hall and a NHL-sized hockey rink, occasionally used by the Edmonton Oilers, the West Edmonton Mall covers the equivalent of 104 football fields.

Suffice to say, although I was looking forward to the exercise, I was not looking forward to sharing the experience with 59,999 other shoppers. I needn't have worried. The mall is so spread out, I didn't feel pressed in by people at all. Well, not until 4 pm when school ended and suddenly the mall teemed with kids! But I'm getting ahead of myself...

I hadn't been back to WEM since the early 80's when a young Wayne Gretzky played for the Edmonton Oilers and was rumored to be one of the backers for the ambitious project. Back then, WEM ran 7 submarines and for a fee - $8 a person if I remember - you could go down into a sub for a ride around the lagoon and see all the sea creatures - everything from blue fish to nurse sharks. It was quite exciting. I was also looking forward to seeing the Aviary.


﻿
﻿ Things changed since my last visit 25 yrs ago. The aviary has been turned into a huge oval kiosk. And only 2 subs remain, neither open to the public. When I look at that little sub now, I can't imagine 8 people used to fit in them. But it sure was fun.

One of the new attractions JJ was quite taken with was RopeQuest. While Jessie went shopping, JJ was challenged by 4 levels of rope rigging. He enjoyed it so much, he wanted to return each day. We didn't as we had other places to see.

﻿
﻿ ﻿We peeked into the 5-football field-size waterpark to see the huge wave simulating the ocean, but it wasn't on the agenda for this trip. Neither was the mini-putt although it was very tempting.
﻿﻿﻿
﻿﻿﻿
﻿﻿ ﻿﻿﻿ As mentioned before, we loved the salt-water lagoon and spent most of our time there.


This place is huge and rises the full 3 floors of the mall.
﻿﻿﻿﻿
﻿﻿﻿﻿
The sea lion show was great fun. I have some video I'll add if there's interest. 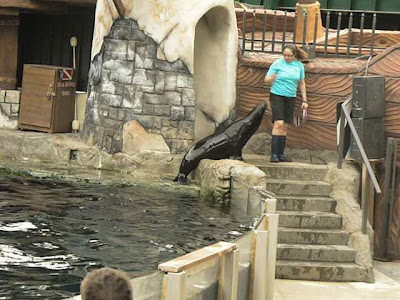 Because we paid to watch the show at Sea Lion's Rock, we were able to go down into the Sea Life Caverns where they had small pools where you could touch skates (rays) and sea anemones.
﻿

Back in the '80s, Glaxayland consisted of a dozen neat rides like the old-fashioned swings that spun you horizontal when it got going, a carousel, and a swinging galleon. My favourite was the balloon ride.

﻿
﻿Everything wasn't so 'puffy' and bright back then, either. And behind/beside the balloon ride was the roller coaster. Now, a new area almost 4 times the size of this old one has been added on and the roller coasters from over there zip over the people on this side...

Instead of 1 rollercoaster, there are now 5 - at least. I was amazed at the engineering expertise that went into fitting so many rides into this area. 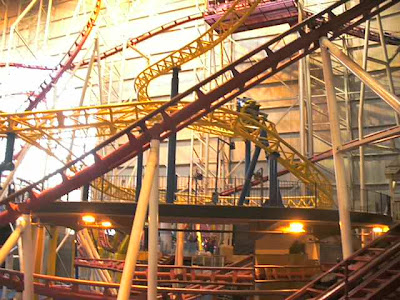 I'll close with a sight that awed me from the first moment I saw it 25 yrs ago. I had the same reaction when I saw it again last week... a full size skating rink in the middle of one arm of the mall. This is where Gretzy and the Oilers used to practice and it always grew huge crowds. Today it's used by different organizations, but there's still public skating on the schedule and skates are available for rent.

So, have you ever been to West Edmonton Mall? What about another mall the same Canadian owners have built... the Mall of America in Minnesota? 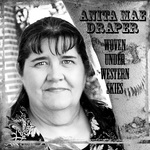 Anita Mae Draper is retired from the Canadian Armed Forces and lives on the prairie of southeast Saskatchewan, Canada with her hubby of 30 plus years and 2 of their 4 kids. She writes stories set on the prairies of Saskatchewan, North Dakota, Montana and Wyoming. Anita Mae has semi-finaled in the Historical Romance category of the ACFW's 2011 Genesis contest and finaled in the Inspirational category of the 2011 Daphne du Maurier, the 2011 Fool for Love, the 2011 Duel on the Delta and 2009 Linda Howard Award of Excellence contests. You can find her at http://www.anitamaedraper.com
Posted by Anita Mae Draper at February 06, 2012