Early Snowshoes for Man and Beast

Last winter, I posted a series on historical sleighs and sleds. I'd like to continue along this vein and start the new year off with a historic look at snowshoes. For starters, did you know that snowshoes were also made for mules and horses?


This ca 1900 image from the McCord Museum shows the round type of snowshoe made specifically to hold up one-quarter of the horse so his weight would be evenly distributed as he walked. Although the McCord Museum contains a huge amount of online digital material, it is located in Montreal, Quebec, Canada and therefore this image is probably from that locale.

This next image of a horse on snowshoes comes to us courtesy of the Stewart Historical Society Museum out of Stewart, British Columbia, Canada.


Curious, I researched these equine snowshoes and discovered the Norsk Folkemuseum in Norway has many on display at their Digital Museum.

Equine snowshoes have been around a long time too, if this image of a 13th century Swedish woodcut is to be believed: 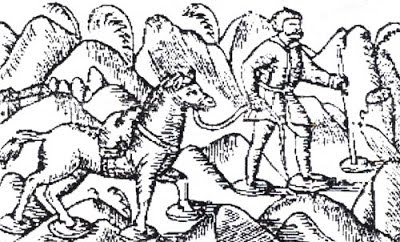 Even the U.S. got into the act because here's a photograph from the Soper-Wheeler Co. from La Porte, California showing The La Porte Stage ca 1911 with their horses wearing the fashionable snowshoes.

Although the above photo is pretty special in my opinion, what set La Porte, CA in the record books was that it's the site of America's first organized downhill ski race using 12-foot snowshoes, back in the late 1800s.


Yes, indeed. It seems that back in the mid 19th century, a Norwegian by the name of John Thompson (1827-1876) was searching for his fortune down in California. After trying his hand at prospecting and ranching, he heard about the struggle to bring mail to communities over the Sierra Nevada mountains. He  made a set of 10 foot wooden skis and a long pole to propel himself forward based on the ones he'd known back in Norway. They were heavy boards that looked like skis - nothing like the flat, shaped ones used by American natives, Canadians, and others in the West.

In 1856, John 'Snowshoe' Thompson made his first mail delivery over the Sierra Nevadas. It was the beginning of a twenty year career which gained him admiration and accolades when the people realized he could indeed get the mail through. This illustration by William M. Thayer, ca 1890 depicts "Snowshoe" using his pole and long oak skis.

In contrast, this Rural New York nurse is wearing a common snowshoe, typical in most snow-laden parts of Canada and the United States. We still have this type, bought in the 1970's and hanging out with our ski equipment.

I have more images of snowshoes, skis and skates, etc, so stay tuned for the next post in this series.


So, what did you think? Were you educated or entertained by this post? 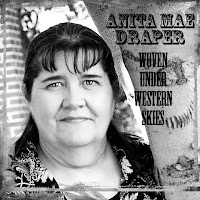 Anita Mae Draper is retired from the Canadian Armed Forces and lives on the prairie of southeast Saskatchewan, Canada with her hubby of 30 plus years and 2 of their 4 kids. She writes stories set on the prairies of Saskatchewan, North Dakota, Montana and Wyoming. Anita Mae has semi-finaled in the Historical Romance category of the ACFW's 2011 Genesis contest and finaled in the Inspirational category of the 2011 Daphne du Maurier, the 2011 Fool for Love, the 2011 Duel on the Delta and 2009 Linda Howard Award of Excellence contests. Anita Mae is represented by Mary Keeley of Books and Such Literary Agency. You can find Anita at  http://www.anitamaedraper.com/