England, 1834
On his morning walk to work, thirty seven year old cabinetmaker Edward Mote was inspired to write a few lines of prose. When completed, he named it  "The Immutable Basis of a Sinner’s Hope."  It was sung in churches in England but we have no copies of the music, only the prose.

Though he'd not been raised in the church--in fact he was a largely unsupervised child of tavern owners in London--Edward found great satisfaction in writing about his faith. The cabinetmaker to whom he was apprenticed took him to church and at eighteen, Edward was baptised. A collection of his poems was published when he was thirty. Twenty Five years later, at 55, he became a minister and served until he was 76. 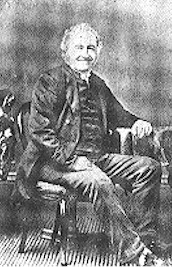 That hymn became known as "The Solid Rock" or "My Hope is Built on Nothing Less" and, in 1863, American composer William Bradbury set it to the melody we know today. It's unlikely that Edward ever heard Bradbury's composition.

I love this hymn and I wonder what inspired Edward to write these words.
Perhaps he'd just read Jesus' parable found in Matthew 7, known as the Wise and Foolish Builders:

Sometimes when life's storms come upon us, it feels like we are reaching to find something sturdy to hang on to. I hope you have that in the Lord Jesus Christ. Don't wait for the storm to grow fierce. If you are wondering if trials and tribulations will come to you . . .  they will.

Have you built your life on rock or sand?