Snowshoes From Yesteryear to Today

Last week was the first of my 2013 historic winter sports posts with Early Snowshoes For Man and Beast. But lest anyone thing snowshoeing is only a winter sport, may I draw your attention to this 1867 print which shows an actual race on turf.

As noted in the caption above, the print was published along with the race results in The Illustrated London News. Yes, it was a real race and proved to be great entertainment to those gathered to watch. But snowshoeing wasn't that entertaining over on this side of the ocean where it sometimes became the only method of transportation through the deep snow.

According to the Encyclopedia of French Cultural Heritage "The first inhabitants of New France had to borrow snowshoes from the Amerindians to get around on foot when snow lay thick on the ground. These snowshoes were made from sinew (leather thongs) knotted and braided on a wooden hoop ... The troops of Canadian and native militiamen led by the brothers Le Moyne (Jacques Le Moyne de Sainte-Hélène and Pierre Le Moyne d'Iberville), to name one example, crossed considerable distances in snowshoes to strike British villages and outposts from New England to Newfoundland in the 1690s." 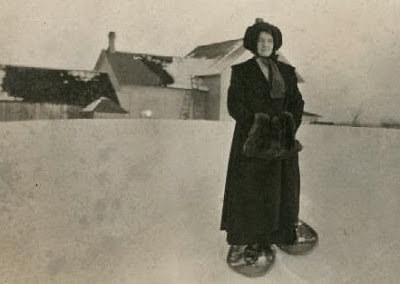 However, it wasn't long before North Americans saw the recreational value of the snowshoes and formed a club.

The Victorian Age emphasized a sound mind as well as a sound body and encouraged physical training for men and women.  Snowshoes clubs allowed participants to enjoy the sport together, often ending the time with a cup of hot cocoa.

Inevitably, racing provided a goal as well as entertainment. Who can turn away from a rousing snowshoe hurdle race? It reminds me of the sport of steeplechase.

Does that look as dangerous to you as it does to me? So much for extreme sports being a product of the 20th and 21st centuries.

Snowshoeing isn't limited to adult men and women. Anyone who can move their legs can walk and/or run on snowshoes.

Snowshoes are round, oblong, pointed, long, and short. I used to think they were different depending on who made them, but I've since learned that it also depends on what type of snow you'll be travelling on.

- aerobic/running (small and light; not intended for backcountry use);

- mountaineering (the largest, meant for serious hill-climbing, long-distance trips and off-trail use)."

And of course, two people alone, not having to worry about anyone hearing their tentative words of love ... snow crunching beneath their feet ... cheeks and noses tingling from cold, but adding to the awareness of being with that special person ... how positively romantic.

There are several YouTube videos out there that show you how to snowshoe, and all the preparation including buying the right kind and how to fall so you can get up again, etc. And although all those videos show you how to move with snowshoes on, they have what I call a big yawnability factor - they were boring. Not only that, but most of my images were from Canada - you know, the foreign frozen north country - So I've chosen a video that was filmed right in the state of New York and is called,
ARE's Brave the Blizzard Snowshoe Race.

So, are you game? Which type of snowshoes would you buy if you had the chance and the time? 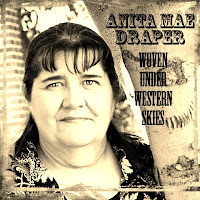