I promised Susanne a post about history today, but let’s start with a quiz.  Oh, you weren’t expecting that, were you?  Let’s try, anyway.  Here are a few questions to test your historical knowledge.  I’ll make it easy on you.  Instead of fill-in-the-blanks, which I hate, these are all true/false questions.

1.      Abilene was founded in 1867 as part of the Union Pacific’s expansion west.  Like most early railroad towns, it was characterized by saloons, gambling halls and so much rowdiness that it became known as “Hell on Wheels.”

2.      The Army post that was established to protect the railroad workers in Omaha is still in existence today, although it’s now an Air Force base.

5.      The Inter Ocean hotel in Salt Lake City was the first anywhere to have electric lights in each of the guest rooms.

Are you ready for the answers?  Number one is false, number two is false.  In fact, they’re all false.  Surprised?  You’ll probably be more surprised to learn that if you substitute “Cheyenne” for the city names I used, the statements all become true.  Yes, in less than twenty years, Cheyenne went from a rough and tumble railroad town to become both the territorial capital and one of the wealthiest cities in the country.  That wealth brought with it many of the amenities you’d expect, including an opera house that attracted the likes of Lily Langtry, streets lined with mansions, some of which boasted their own ballrooms, and electric lights for both homes and streets.

Though Cheyenne was founded as a railroad town and though the Union Pacific, along with the territorial government were major contributors to the city’s growth, much of the wealth came from cattle.  Believe it or not, raising cattle in Wyoming came about almost by accident.  When bad timing forced one herd to remain in Wyoming rather than be driven east during the winter of 1854, the owner left, probably expecting the worst.  Instead, when he returned in the spring, he discovered that not only was his herd still intact, but the animals had thrived on the air-cured grasslands of eastern Wyoming.

Cattle ranching grew rapidly in Wyoming Territory, in part because of the open range.  Who could resist the lure of free grazing?  The result was an influx of ranchers and cattle companies, culminating in what was called the “Great Grass Bonanza” of 1876 to 1886.  It was during that era that Cheyenne reached its pinnacle of wealth and influence, with cattle barons dominating the city’s social events.  But all things end.  Greed that led to overgrazing, and a particularly brutal winter with massive herd losses caused many of the cattle barons to declare bankruptcy during the spring of 1887.

Depressing?  Some might say so.  I’m sure that if I’d lived in Cheyenne then, I would have been distressed by all the changes that the end of that first cattle era brought.  But as an author 125 years later, I found that final year of immense wealth and prosperity intriguing enough to use it as the background for Waiting for Spring.

So, let’s end with one more quiz:

Thanks for sharing with us today, Amanda!

Here's a peek at Waiting for Spring (available now!): 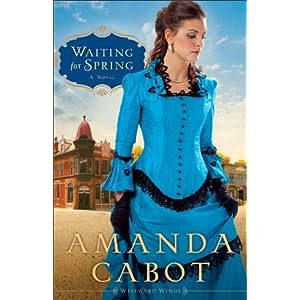 After the loss of her husband and the birth of her baby, Charlotte has had a long, hard year. But when a notorious robber believes she knows the location of a long-lost treasure, she flees to Cheyenne and opens a dressmaker's shop to lie low and make a living. When wealthy cattle baron and political hopeful Barrett Landry enters the shop to visit her best customer, Charlotte feels drawn to him.

If Barrett is to be a senator of the soon-to-be state of Wyoming, he must make a sensible match, and Miriam has all the right connections. Yet he can't shake the feeling that Charlotte holds the key to his heart and his future.

Soon the past comes to call, and Barrett's plans crumble around him. Will Charlotte and Barrett find the courage to look love in the face? Or will their fears blot out any chance for happiness?

***
Susanne here: How'd you do on Amanda's quiz? Have you ever been to Cheyenne? Do you think the book cover is as pretty as I do?