I'm a sucker for a musical. I love the whole idea of living life to a soundtrack. Bursting into song during a moment of crisis? Makes perfect sense to me. The more dramatic and gut-wrenching the songs, the better. You know, there'd be a lot less road rage if everyone sang along to show tunes in the car.

I saw Les Miserables performed on stage about twenty years ago and fell in love with it. When I heard it was being made into a movie, I was excited, especially when I heard that Hugh Jackman and Anne Hathaway were cast. Then, I found out that the actors were performing their vocals live as the movie was being filmed, a first for a movie musical (which I blogged about earlier here). By the time the movie came out, I had very high expectations.

My son and I went to see it together on Christmas day, the first day it was out. The theater was packed, but since we got there early we had perfect seats. As the previews came to a close and the lights went all the way down, I felt that moment of anticipation. And then, with the opening notes of the Overture, the goosebumps started.

Les Mis is essentially a tale of grace versus the law. One man, Jean Valjean, when presented with an act of grace and mercy, embraces it. The other, Javier, receives his own moment of grace, but he can't comprehend it. He's lived his life by the law, and he sees no other way. This is all set against a backdrop of revolution, poverty, and love that never dies. 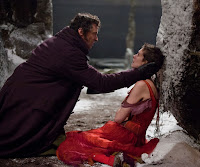 I've heard people say that they wished the vocals in the movie were "cleaner." In other words, that they'd taken the actors back to a studio and recorded beautiful, pitch-perfect versions of the songs. But one of the things that gives Les Mis so much power is the raw emotion in those performances. When Anne Hathaway, as the tortured Fantine, sings I Dreamed a Dream, it's as gritty and and angry as the character herself. Fantine has sunk as low as she can go, and you feel her desperation and pain.

It's a long movie, about three hours, and there are a few places where it drags just a bit. But overall, Les Miserables is a powerful look at how people treat each other, how we view God, and how love has the power to transcend just about anything. I highly recommend it.

How about you? Are you a fan of the movie musical? Which one is your favorite?

JENNIFER ALLEE believes the most important thing a woman can do is find her identity in God – a theme that carries throughout her novels. A professional writer for over twenty years, she's done extensive freelance work for Concordia Publishing House, including skits, Bible activity pages, and over 100 contributions to their popular My Devotions series. Her novels include The Love of His Brother (Five Star, 11/07), The Pastor’s Wife (Abingdon Press, 2/10), The Mother Road (Abingdon Press, 4/12) and the upcoming A Wild Goose Chase Christmas (Abingdon Press, 11/12). She's thrilled to be working on her first historical series with the amazing Lisa Karon Richardson. Diamond in the Rough is the first book in the Charm and Deceit series, to be released May 2013 by Whitaker House. And... as if that's not enough, her novella Comfort and Joy will appear in the Christmas anthology, Mistletoe Memories (Barbour, 9/13) She's a member of American Christian Fiction Writers, Romance Writers of America, Christian Authors Network, and the Christian Fiction Blog Alliance.
Visit Jennifer's website at www.jenniferallee.com/