REFUGE OF THE HEART by Ruth Logan Herne, Reviewed by Rebecca Maney

"How she went from being a young doctor approaching residency, almost affluent by town standards, to being a commodity, sold to nameless soldiers, night after night." 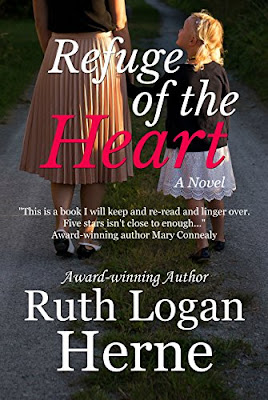 Magdalena Serida's life, before receiving a church-sponsored refugee immigration opportunity, had been a nearly unbelievable mixture of pain and pleasure. Being caught in the crossfire of the heinous Russian insurgency into Chechnya, she lost everyone in her family to war, except her young sister. Now living a quiet life, studying to earn an American degree as a registered nurse, Lena works part time in a seniors care facility to support herself and her sibling. It takes a snowy evening, a flat tire, and a handsome stranger, for Lena to begin feeling a mixture of fear, hope, and uncertainty; who could possibly forgive her past, but the Almighty God?

District attorney Mitchell Sanderson is fascinated but the lovely Lena Serida and her precocious little sister, Anna. Coming to their aid, Mitch discovers a side of himself that isn't all about law, order, and political aspirations. As their friendship blossoms, it's obvious that Lena still carries heavy burdens and unnatural fears; she rarely speaks of her past and she is hesitant to take steps towards their future. Are they building a relationship on solid rock or sinking sand; can the pieces be put back together again if their dreams suddenly come crashing down around them?

Not only is this a fascinating story, it's a sober reminder that life is precious and that we, as members of Christ's body, are called to come to the rescue of those beaten and battered by circumstances beyond their control, with a loving and compassionate spirit.


BACK COVER BLURB:
District attorney Mitchell Sanderson lost his family to tragedy. He became a dogged prosecutor, with an enviable conviction rate. But when faith, conscience and love of a troubled refugee ripple the smooth waters of his existence, can Mitch risk everything for love?

Magdalena Serida fought her way out of a govenment-quelled uprising in Chechnya. The church-sponsored refugee knows the horrors of war first-hand. Now in America with her five-year-old sister, Lena is uncertain who to trust. Her faith has maintained her through the loss of her family, but when Mitch Sanderson shows interest, Lena longs to take a chance. Should she open herself up to this man of law and order, a man who imprisons women like her? Or slip quietly back into the shadowed fringe of anonymity?

Reflecting the world's turbulence and the plight of global refugees, award-winning author Ruth Logan Herne shrinks the vast numbers to the story of one woman... one child... the travesty of war and the grace of peace in this Maggie Award-winning book of faith, hope, love... and freedom. Lena's story won't just grab your heart. It will touch your soul.