"When I look at ye, Jenny White, I see . . . the kind of woman bred to life on a frontier. The kind who not only survives, but thrives . . . . . who stood her ground before savages, or fed her family through the winter. Or got this wounded lout on a horse, fished a bullet out of his leg, and cured him with herbs." - Across Three Autumns, Denise Weimer 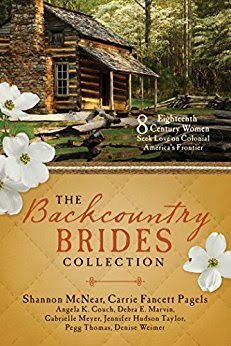 It was a harsh world in the mid-to-late 1700's, especially for women. All up and down the East coast and beyond, remnants of wars and conflict battled for attention; killing men, women, children, and friends in its bloody wake. With the skill and grace that you would expect from this group of authors, a story emerges. A story filled with determination, bravery and courage; hard work, severe loss, new beginnings. It's the story of our country, with a focus on eight women who were determined to make freedom their home; accepting the risk of losing their hearts in the process.

I purchased a print copy of this book and received a digital copy from Net Galley. The opinions stated above are entirely my own.


The Backcountry Brides authors are hosting a Rafflecopter with multiple giveaways. Consider participating!