THE ACCIDENTAL GUARDIAN by Mary Connealy, Reviewed by Paula Shreckhise

The Accidental Guardian by Mary Connealy is the first in the series High Sierra Sweethearts. I have long been a fan of Mary Connealy. She is my go-to author when I’m in the mood for a cowboy story. 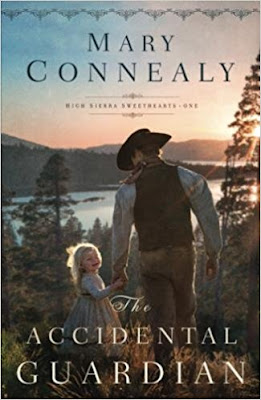 There are troubling times in October, 1807. Deb and Gwen Harkness are caretakers of two small children in exchange for passage to California on a wagon train. Fortunately, they are away from the train in the tall grass early one morning when tragedy strikes. Three outlaws arrive and slaughter everyone in their five wagon group. Trace Riley is a loner. He is coming back from a cattle drive to his small spread in the Sierra Nevada’s. His two hired hands have gone on ahead to tend to the cattle left behind at the ranch. Trace rides up on the site of the ruined camp and something he didn’t expect to see: Survivors!

With Winter coming quickly, the only thing he can do is take the two women and two little ones back to his ranch with him. Trace knows what it’s like to be a survivor of a massacre and wants to protect others from the same fate. Will Trace find the men who committed this atrocity? Are they the same men who killed his father years ago? How much danger are they in? Will Deb and Gwen make their way to California to deliver their young charges? Deb struggles with deciding if she wants to fulfill her dream. Is her dream changing? Trace stuggles with the fine line between anger and revenge versus relying on God to set things straight.

Mary’s narrative shows the beauty of Lake Tahoe. The descriptions are breathtaking. In Trace and his two hired men, she depicts the loyalty and honesty of what a real cowboy should be. And let’s not forget being polite and respectful of women. Gwen and Deb exhibit their gratefulness for being rescued by being very hardworking. There are familiar trademarks in this novel such as the echoing voice from one character to another. An example is from Chapter 26 after Deb has a disagreement with Trace: “All he could figure really was the simple fact that women were strange creatures.” And next: “Deb watched until Trace disappeared around a bend in the trail. Men were strange and that was that.” The humor is there but is against a backdrop of a serious, sobering situation. This novel leaves some loose ends for Mary to tie up in the upcoming books. I am looking forward to the next installment of this series .

BACK COVER BLURB:
When Trace Riley finds the smoldering ruins of a small wagon train, he recognizes the hand behind the attack as the same group who left him as sole survivor years ago. Living off the wilderness since then, he'd finally carved out a home and started a herd--while serving as a self-appointed guardian of the trail, driving off dangerous men. He'd
hoped those days were over, but the latest attack shows he was wrong.

Deborah Harkness saved her younger sister and two toddlers during the attack, and now finds herself at the mercy of her rescuer. Trace offers the only shelter for miles around, and agrees to take them in until she can safely continue. His simple bachelor existence never anticipated kids and women in the picture and their arrival is unsettling--yet enticing.

Working to survive the winter and finally bring justice to the trail, Trace and Deborah find themselves drawn together--yet every day approaches the moment she'll leave forever.

* I checked this book out of the library. All opinions are my own.*