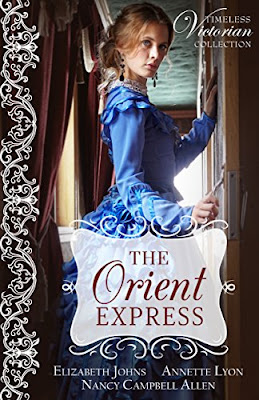 #1 To Break a Betrothal by Elizabeth Johns
A nice jaunt into a Regency set on the plush train.
Kate has lived in India most of her life. Her father has died so she travels back to England on the Orient Express. She is an heiress now, so she decides to go incognito on her journey to reunite with her betrothed. It is a long arranged marriage to a man she only met once as a child.

Enter Stephen who is in the service of the Queen. He is also traveling under an assumed name, Mr. Brown. Stephen is on the train, trying to complete one last duty before finishing his Army commission and stepping into the role of Lord Darlington.

Kate is reluctant to go through with the arranged marriage and is bent on breaking the betrothal.
In his undercover operation, Stephen is looking for a lady spy. Is Kate in his sights as a possible suspect or does he have other aspirations? Find out in this well written, lovely, novella.

Two strangers meet on the Orient Express. One is a novelist with the pen name Eldrick Stiles, traveling under his real name Marshall Bailey. The other is a detective also traveling under an assumed name. But there is a twist! The detective is Grace Thompson.
This novella describes Grace and Marshall getting to know one another. There is lots of trepidation on both parts but an undeniable attraction.
What interested me was Marshall’s thoughts. It seems Annette is speaking from experience about the real life of an author— the part the public doesn’t see. All the insecurities and the mundane tasks. I like seeing the “ real stuff”. It makes the characters likeable and genuine.
I was fascinated by Grace and her initial distrust of men. She looks for possible scoundrels in order to protect other women from their wiles. She is always looking for a man as upstanding and compassionate as her grandfather.

#3 Married on the Orient Express by Nancy Campbell Allen
A bogus marriage involving a Scotland Yard detective and a young American lady trying to save her brother make for a merry mystery aboard the Orient Express. Who do detective Vincent Brady and Miss Emily Grant trust on their way to Constantinople to rescue her brother who is being held for ransom? Will they reach him before it’s too late? Will their pretend marriage turn into something more? Another great novella. It really held my interest.

TO BREAK A BETROTHAL by Elizabeth Johns:
Recently orphaned heiress Kate Worthington must travel to England from her home in India to break an outdated betrothal contract. Surely the lure of money will tempt Lord Darlington to release her! A gentleman befriends her whilst she is aboard the luxurious Orient Express, and the attraction she feels firms her resolve to break the betrothal. What she does not count on is Lord Darlington’s hidden depths. She has so much to lose, least of which is her heart.

DETECTIVE GRACE MEETS HER MATCH by Annette Lyon:
Even private investigator Grace Thomas needs a vacation, yet she can’t exactly turn off her detective skills at a whim. Boarding the Orient Express might be a vacation for some, but Grace finds that her senses are on high alert. She prides herself in being one step ahead of any flirtatious gentlemen, and fellow passenger Marshall Bailey is no exception. When Grace discovers that Marshall is traveling under another name, she learns that her first impressions aren’t always correct, and that she’s mistakenly allowed him to play havoc on her heart. Marshall will just have to convince Grace to give him a second chance.

MARRIED ON THE ORIENT EXPRESS by Nancy Campbell Allen:
Detective Vincent Brady must recover a priceless statue before it falls into the wrong hands. The only problem is that the American woman who’s carrying it for her brother has no idea the value. Vincent catches up with Emily Grant, but convincing her that he’s not out to harm her or her brother is harder than Vincent expected. Finally, Emily agrees to travel with Vincent on the Orient Express, and they plot how to rescue her brother while keeping themselves out of harm’s way. Vincent soon discovers that out of all the hardships he’s overcome in his lifetime to rise to his current detective status, convincing Emily to take a chance on him even harder.

Books in the Timeless Regency Collections:
AUTUMN MASQUERADE
A MIDWINTER BALL
SPRING IN HYDE PARK
SUMMER HOUSE PARTY
A COUNTRY CHRISTMAS
A SEASON IN LONDON
FALLING FOR A DUKE
A NIGHT IN GROSVENOR SQUARE
ROAD TO GRETNA GREEN

BUY The Orient Express at Amazon.com
Posted by Debra E. Marvin at May 19, 2018