"He's back! Henry Stockton's back from the grave!"

Kate Dearborne has already seen the local ghost with her own eyes; the Stockton Mill owner's grandson was apparently never killed in the war, for Henry Stockton has returned to Amberdale to join his family's thriving business, and while unbeknownst to her father, Kate--through no fault of her own--has just become reacquainted with the imposing local figure. 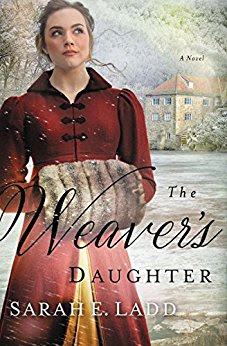 Returning home after serving his country, Henry Stockton mistakenly believes that he is arriving back to the same peaceful community that he left behind; however, nothing could be further from the truth. His grandfather's iron clad business tactics have hardened his approach to profit, stirring wide discontent between the local weavers and those who have chosen to step forward and become employed by Stockton Mill. One man has truly crossed the line; Charles Dearborne, son of a formidable weaver. But it's the beautiful weaver's daughter that strikes the eye of Henry Stockton; in spite of their differences, and it in spite of his business partner's alluring daughter; who makes it quite clear that she wants to become Mrs. Henry Stockton.

As tensions rise and the stakes become higher, will Kate and Henry rise to the occasion, or will they fall back on conventionality and destroy any chance of happiness between them? For, "they were two people fighting the same battle on different sides of the war".

Enjoy Sarah Ladd's melodic style, as she demonstrates her own knowledge of weaving; using the power of words to fabricate a beautiful story.

*I purchased this book and this is my honest opinion.

BACK COVER BLURB:
Kate's loyalties bind her to the past. Henry's loyalties compel him to strive for a better future. In a landscape torn between tradition and vision, can two souls find the strength to overcome their preconceptions?Loyalty has been at the heart of the Dearborne family for as long as Kate can remember, but a war is brewing in their small village, one that has the power to rip families asunder --including her own. As misguided actions are brought to light, she learns how deep her father's pride and bitterness run, and she begins to wonder if her loyalty is well-placed.Henry Stockton, heir to the Stockton fortune, returns home from three years at war hoping to find a refuge from his haunting memories. Determined to bury the past, he embraces his grandfather's goals to modernize his family's wool mill, regardless of the grumblings from the local weavers. When tragedy strikes shortly after his arrival, Henry must sort out the truth from suspicion if he is to protect his family's livelihood and legacy.Henry has been warned about the Dearborne family. Kate, too, has been advised to stay far away from the Stocktons, but chance meetings continue to bring her to Henry's side, blurring the jagged lines between loyalty, justice, and truth. Kate ultimately finds herself with the powerful decision that will forever affect her village's future. As unlikely adversaries, Henry and Kate must come together to find a way to create peace for their families, and their village, and their souls - even if it means risking their hearts in the process.