THE TRUTH BETWEEN US by Tammy L. Gray, review by Winnie Thomas

Tammy L. Gray is a master at creating messy, broken lives for her characters. Then, she throws them in and proceeds to stir them around and mix them up before healing them and bringing them out as better people. In her book The Truth Between Us, the main characters, April and Sean, are both hurting from a major breakup between them. I had a little difficulty liking April at first due to her brash, and sometimes tactless, demeanor. As the story progressed, it was easy to see her defense mechanisms and why she reacted to situations the way she did. I liked Sean with his easy-going manner and his loyalty to April, even when she pushes him away. He’s not without his faults, but his unconditional love for April easily won me over. 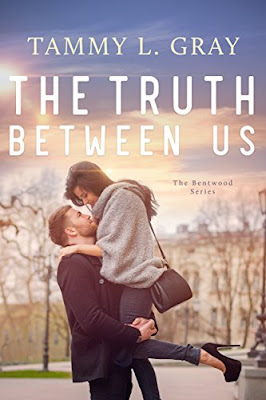 Gray is not afraid to tackle hard, gritty subjects and weave some inspirational threads through them. Forgiveness, mercy, unconditional love, and hope are all part of this compelling, transformational story. The Truth Between Us is the second book in Gray’s Bentwood series. It can be read as a stand-alone, but many of the characters from book one are included in book two. I’m eagerly awaiting the next book in the series.

Backcover Blurb:
Nine years to win her. Three years to love her. And one decision that destroyed it all.

April Duncan was raised with three clear truths: the family name is absolute, ambition and success rule over every emotion, and love always comes with strings attached. Image was everything in her carefully crafted world... until the mirror cracked.

Sean Taylor was April's best friend, the one man who taught her it was okay to let her guard down and to rely on someone. She trusted him. She loved him. Which made his deception the darkest kind of cruelty.

Now, nearly a year later, she’s ready to leave her failed engagement in the past and get back her life and her estranged family, even if it means dating a man solely for his connections. She’ll never again choose love over loyalty.

Sean has spent his entire life breaking barriers, facing challenges, and never giving up. Until one impossible choice destroyed his future and left him no option but to flee from the woman who annihilated his heart.

Now he’s back in Bentwood and determined to make her hear the truth and rebuild the trust he shattered. But April has become a mere shell of the woman who claimed his heart long ago.

Winning her back is more than just seizing a victory, because if he fails… the girl he’s loved for a lifetime will disappear forever.

The Truth Between Us is the second book in the Bentwood series. Each book can be read as a standalone, but it is recommended that you begin with book one to get the full experience among this tight group of family and friends.

Available at this time only in digital ebook:
Buy The Truth Between Us at Amazon