THE HOPE OF AZURE SPRINGS by Rachel Fordham, review by Rebecca Maney

"Soon enough she'd be back to merely surviving, but for now, in this moment, the world felt brighter." 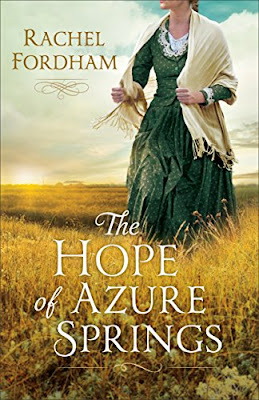 Sleeping in a barn and working for non-existent wages, the past seven years have not been kind to Em ("a mighty plain name for a mighty plain girl"), but it seems that a near death experience has totally changed her life. Nearly bleeding to death from a gunshot wound, and terribly malnourished, Em is found unconscious by several residents of Azure Springs, Iowa. When the local sheriff begins to unpack Em's story, " . . his gut (tells) him that this was no usual crime"; Caleb Reynolds is a determined man, and the waif like victim has quite the story to tell.

Living with a gracious, esteemed family in the community during her convalescence, Em struggles to find her place; uneducated and rather ordinary in appearance, she wraps herself in their kindness; the likes of which she has never known. When her friendship deepens with the handsome sheriff, uninvited trouble appears on the horizon. And her future remains rather murky; for Em is determined to find the younger sister that she was forced to leave behind.

"Sometimes the steepest roads lead to the grandest views."

A lovely debut with some inevitable predictability, but also sprinkled with glimpses of life's uncertainties and a beautiful ending.
Book provided courtesy of Baker Publishing through "Interviews and Reviews". *I was under no obligation to review or provide a positive review.

BACK COVER BLURB:
Seven years ago, orphaned and alone, Em finally arrived at a new home in Iowa after riding the orphan train. But secrets from her past haunt her, and her new life in the Western wilderness is a rough one. When her guardian is shot and killed, Em, now nineteen, finally has the chance to search for her long-lost sister, but she won't be able to do it alone.

For Azure Springs Sheriff Caleb Reynolds, securing justice for the waifish and injured Em is just part of his job. He's determined to solve every case put before him in order to impress his parents and make a name for himself. Caleb expects to succeed. What he doesn't expect is the hold this strange young woman will have on his heart.

Debut author Rachel Fordham invites historical romance readers to the charming town of Azure Springs, Iowa, where the people care deeply for one another and, sometimes, even fall in love.