A story with two Pinkerton agents? Count me in! These are among my favorite kind to read because I know there’s going to be a case to solve, and I like trying to solve it right along with them. 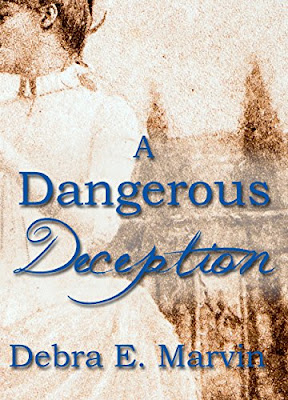 Andromeda (Andy) Barrington and Connell O’Brien have two separate missions and two criminals to catch. But they can’t alert the town of Jerome, Arizona as to their real identities, and a good Pinkerton agent can pull it off and catch their man at the same time. Another reviewer called Andy sassy and quirky, and I’d have to agree with that. She has enough spunk and smarts to fool the best of them. There were enough clues to guess what her past life was too! As for Connell, I’m a sucker for an Irish accent and he has plenty of that to go around! Putting that aside, he’s a good agent and plays his cards just right to catch his murderer. These two end up working together tangling missions and hearts! My favorite part of the story is always the happily-ever-after. I also found it to be action packed and a little bit of danger to keep me on my toes.

What I loved the most was Debra put circus definitions before each chapter. For example, did you know that the term “Gag” is the short, silly clown tricks used as transitions between circus acts? Or that “Circus Candy” is the fancy packaged, yet low quality sweets hawked to circus crowds with the promise of secret prizes inside? These little tidbits where fascinating to learn and added fun to the story; makes me want to find a circus near me to go to!

All in all, this was a good afternoon read with just the right amount of pages and plenty to keep me interested and invested.

*I received a complimentary copy from the author and was under no obligation to leave a positive review. *

Jerome, Arizona Territory, 1899
When Andromeda Barr left her colorful past behind in pursuit of a normal—albeit solo—life, she didn’t exactly settle for the mundane. Performing is in her blood, and right now she has to believe she’s lying for all the right reasons—justice for the excluded, the overlooked of society—a debt she owes to the two unusual people who raised her.

Pinkerton Agent Connell O’Brien is on the trail of a wanted murderer holed up in ‘the wickedest town in the west.’ Hiding his identity is part of the job, but when he meets the surprising Miss Barrington, he begins to wonder how many secrets are too many.

Two close calls with disaster seem to suggest it’s time they both stop running from the guilt of the past and let mercy catch up, but will these two solo acts join forces before the danger of discovery becomes a matter of life or death?